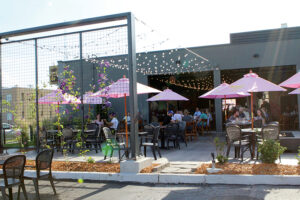 A nearly-new brewery, Lua Brewing is quickly checking off the boxes on its list of must-have brewery highlights.

The first item on the list is the location. Itâs not in the burbs, yet itâs not smack downtown. It sits in the Sherman Hill district, with a view of 801 Grand in the backdrop. This is one location friends can agree on, and it has decent parking.

Secondly is the beer. Of course, itâs a brewery, right? Head brewer and Lua Brewing co-founder Zack Dunbar brewed his first batch of beer at age 14. Although it was with his dad for a science experiment, he got the bug and became a lead brewer at Forager Brewery in Rochester, Minnesota.

At this visit, Lua offered 16 beers, including âCelebrating Early,â a hazy triple IPA, a German hefeweizen, a handful of sours and more. With eight 20-barrel tanks, the brews are fresh and innovative.

Lua Brewing is a microbrewery and restaurant that is named after co-founders Whitney and Scott Selixâs dog, Lua.

Several of the beers are in collaboration with other Iowa breweries, including Big Grove, Barn Town Brewing, Toppling Goliath and others. Dubar says local breweries proved helpful in opening and promoting each otherâs brews.

âWeâre friendly with the other breweries,â he explains. âThatâs the fun part of craft beer. Weâre all trying to widen the slice of beer. The more beer, the better. It benefits everyone.â

Ciders, cream soda, root beer and wine by the glass or bottle are offered. Bottles are only available in house or to go. Or ask for a pull at El Bait Shop, Iowa Tap Room or right up the street at Carlâs Place.

The huge patio is the fourth feature. The patio overtook part of the parking lot during the pandemic. Twin garage doors allow for an open-air feeling in the brew hall. The trees in the background give it an urban yet cozy vibe. 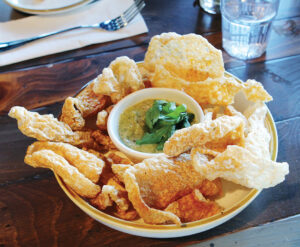 An innovative menu developed by Executive Chef James Arbaugh, a former chef at a Michelin-starred Plumed Horse in San Francisco, is the fifth highlight. I sampled the fried Italian Broccolini, which didnât taste like a wilted floret; this was drizzled with ricotta, La Quercia coppa and parmesan tuiles. Why canât all vegetables taste like this? Other offerings include vegan and gluten-free dishes, and a favorite: the Lua Smashburger.

Ordering is a snap with your phone. Place your order, put your name in, and the beer starts flowing. It was a personalized touch when the waitress said, âJackie, hereâs your order.â

Checking off boxes felt like a refreshing, well-deserved accomplishment. Iâm ready to return and do it all over again. ♦