Five bars, games are rolled into one. 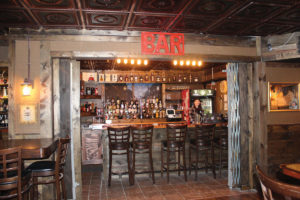 When entering the Lumber Axe on Southwest Sixth Street, a sign is posted with five options. Do you take a left to the Escape Chambers, or do you continue into the Lumber Axe, a combination bar and axe-throwing venue? Or maybe you prefer a quieter vibe with the Elixir bar? A final option is to head upstairs to the Captainâs Deck or the Crown Royal Lodge.

The Lumber Axe, formerly a laser tag center, opened up earlier this year, and the Escape Chambers opened five years ago. The dark wood dÃ©cor and tin ceilings give it a rustic feel, complete with the smell of wood.

The Lumber Axe includes a seated bar area, tables, and a dozen wired cages, where âaxepertsâ demonstrate how to properly throw an axe. Shouts of â3, 2, 1, throw,â followed by a thwack sound were commonplace throughout the evening.

A cocktail bar and food menu means patrons can sip, chomp and throw all in one location. With 10 pages of available whiskeys, the bar claims to have the largest whiskey selection in Des Moines.

Elixir, which just opened Halloween weekend â and is only open weekends â is cozy and quiet and serves other spirits, such as flavored vodkas and high-end tequilas.

âWe also plan on having a wine bar, where you can pick up a nice bottle. Or have a cocktail with any spirit you ever wanted to try,â she says.

Thereâs domestic, craft and local beers available in cans, bottles and on tap. Occasional specials include the âaxedâ beer for $3. Josh Gillaspey, bartender, says itâs like a mystery beer. He says, âItâs a keg about to go, or we pick a beer and serve it to our customers.â

A menu includes appetizers, pizza and elixir mixers â where you can choose your ingredients.

The upstairs bars, Captainâs Deck and Crown Royal Lodge, serve as an overflow bar and include a stage for live music. The band Flogging Molly played recently. An upcoming New Yearâs Eve costume party will be the âGreat Axeby 2020â with live music and prohibition cocktails.
April says people from all walks of life come not to just throw axes but to enjoy the bar scene.

âWeâre like the modern day circus carnies,â she says. âWe offer various games and tricks throughout the bar.â

The bar is close to downtown, and April thinks the concept and location are ideal.

âIâm completely in love with this place,â she says. âThereâs an awesome staff, and we offer so much to do.â ♦