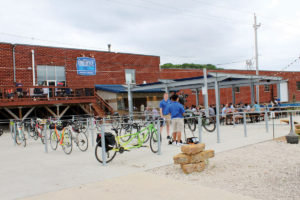 The patio at Confluence is popular with bicyclists.

When Confluence Brewing Company opened up in 2012, the staff created a handful of beers inside the brewery in an industrial district close to Grayâs Lake. With potential for expansion, the grassy area in the back offered an untapped gem with the nearby bike trail.

A recently expanded patio is a highlight of the brewery, which is just off the Kruidenier and Meredith bike trail. The patio doesnât overlook a cement parking lot with noisy traffic. Instead, it offers a quiet, inviting oasis with tall trees and greenery. The only disturbance is the faint sound of cyclists unclipping their bike clips and bike shoes and then clacking over the cement on a trek to quench their thirst.

The original upper level patio soon morphed into a large slab of concrete with equal room for bicycle parking as there is for patrons. Owner John Martin says the completed project is ideal.

âItâs much bigger than we originally thought, but I love it. We worked with the city to have a bike path to our place,â he says. 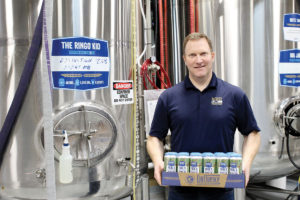 Confluence owner John Martin displays a case of beer in the brewery.

Deb and Brent Havermann are avid bicyclists and stopped for a mug of the Small Town Brown ale. A destination bike ride from their Clive home offers a 20-mile round-trip ride.

âWe really like the patio,â says Deb. âIâm glad they paved the path from the trail. I always worried about popping a tire to get here.â

After California wildfires destroyed Sierra Nevada Brewing, breweries came to their aid. After helping the brewery, John suggested keeping the assistance closer to home and, this spring, created a Local Cause White Ale.

They offered the net proceeds of the beer to benefit the Iowa River Revival, a nonprofit protecting Iowaâs rivers and streams. The brewery teamed with Confluence Landscape Architecture, which offered to match their donation.

The future of Confluence is ever-changing, and John plans to continue to expand the brewery.

âWe want to be the brewery of Iowa,â he says. âIt sounds corny, but we love what we do, and weâre proud to be part of the community.â ♦