Two men and a brewery 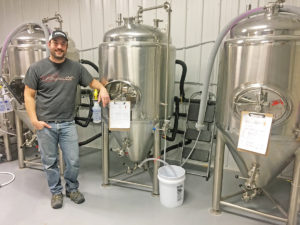 Co-owner Steve Crann in the brewing room, which was previously a two door car wash. 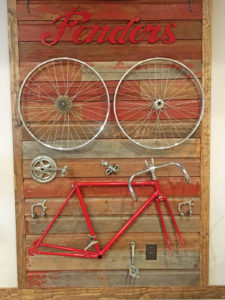 Fenders Brewing co-owners Jason Madison and Steve Crann say their origin story is âthe classicâ tale of home brewers who met and started a business together. The two men met through their church, St. Lukeâs in Ankeny.

The two co-owners â and the companyâs only employees â celebrated the grand opening of their brick-and-mortar brewery on the Polk City Square on Dec. 22, 2017. Both men live in Ankeny but liked the action the Square location offered. Positioned near Saylorville Lake, Big Creek State Park and the Neal Smith Bike Trail, the nano brewery attracts the cycling crowd and other outdoor enthusiasts. Both are cyclists â both have pedaled in multiple RAGBRAIs â and recognize the happy marriage between bicyclists and beer.

âItâs something weâre passionate about it; it just happens to be the trending thing,â Crann laughs. The breweryâs name, Fenders, also comes from this shared passion.

Before the brewery was a brewery, it had also been a bakery, supermarket, arcade and physical therapy office. The actual brewing room (nestled in the back of the building) was previously a two door car wash. Parts of the bar were made from steel roofing from the car wash, and much of the wood dÃ©cor throughout the taproom is reclaimed
wood from Steamboat, Iowa, that was purchased on Craigslist.

The cozy and inviting taproom offers board games and flat screen TVs for viewing pleasure. They do not serve food but do allow customers to bring in whatever theyâd like to munch on. Next door neighbor Papaâs Pizzeria is a favorite among customers and delivers to the brewery.

Currently Fenders has nine of its own beers and three local guest beers on tap â and growlers to take them home in. The breweryâs nine beers range in alcohol content from 4.9 to 7 percent, with the lowest being the Adrift amber ale and the highest being the Stocious Irish red ale. Crannâs favorite is the 8:13 American pale ale.

âItâs got a nice citrus taste to it, even though thereâs no legitimate fruits in it. Itâs all hop-based,â Crann says. âItâs refreshing, too.â

Plans are also in the works to add seasonal brews in the future.

âA lot of us are out there just to brew good beer, enjoy good beer and enjoy peopleâs company,â Crann says.