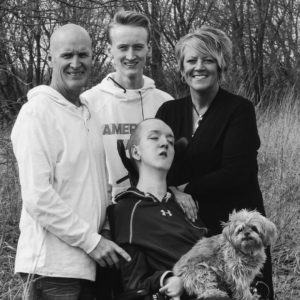 Bridget and Dennis Baer moved to Bondurant 25 years ago. They knew they wanted to live in a small, tight-knit community like their hometown of Schleswig. They had no idea how the Bondurant community would support their family in the years ahead.

The couple has two sons, Carson, 23, and Parker, 19. As their sons have grown, so has the once small town of Bondurant. Parker started kindergarten with about 60 other kids. His graduating class last year was nearly double that size.

âItâs hard to believe that all of the cornfields have now turned into communities,â says Bridget. âBut, we still feel like itâs a small town. Everyone still knows everyone.â

Watching the town grow is something the Baers have enjoyed. They have lived in the Cove neighborhood for the past 15 years. At one time, more than 50 kids lived on their street.

âWe just love our neighborhood,â says Bridget. âWatching all the kids grow into young adults has been so much fun.â

The family designed and customized their home and moved in when the boys were in grade school. Carson has special needs, so it was important to design the home with his health in mind.

âRaising a child with special needs has not always been easy,â says Bridget, âbut I always say, if I have to have what I got, Iâm pretty lucky.â

When Carson was a baby, Bridget and Dennis knew something was wrong. He wasnât sitting up or walking like other babies his age. They took him to hundreds of doctor appointments, the Mayo Clinic, and other out-of-state childrenâs hospitals, but test after test came back without conclusive results.

âThe hardest part was never getting any answers,â says Bridget. âWe had every test imaginable and nothing. After seven years of testing, we decided that he had taken enough of all the poking and prodding with no answers. We had taken enough, too. We were done.â

Instead of focusing on the lack of information, the family focused on all the things Carson can do. He attended Southeast Polk schools for 16 years. The Bondurant school district did not have the ability to help Carson within the its school system, but they took responsibility for his schooling. He was transported to and from school at Southeast Polk, and the district supplied him with the equipment he needed.

âThey never told us no,â says Bridget. âThey supplied Carson with a bus driver that loved him like her own son. Bondurant schools really went above and beyond for our family.â

Southeast Polk schools did the same, she says. When class sizes were expanding, they were assured that Carson, who was open enrolled, would be able to stay at school no matter what.

âWe were extremely blessed with two local schools that took such great care of our guy,â she says. âThey loved him and treated him like the special guy he is.â

To this day, at age 23, Carson is still undiagnosed. The family has come to terms with the fact they may never have the answers they are looking for. They continue focusing on the positive and taking each challenge head-on.

âWe lost all nursing care for Carson two years ago when he turned 21,â she says. âWe went from having a home nurse eight hours a day, seven days a week, to nothing because he turned 21.â

Bridget, a hairstylist, moved her business to her home and continues to care for her son. She focuses on the fact that she is fortunate to spend time at home with her âspecial guy.â

âIâm blessed. He is such a sweet guy,â she says. âParker is such a great little brother. They are the best boys I could ask for.â

The support they have received from the community is unlike anything they hoped for when they first moved to the âsmall townâ 25 years ago. ♦