He keeps an eye on the night sky. 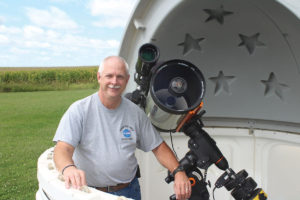 Roger Berry says that, between planets, stars, comets, asteroids or spacecraft, space is a busy place, and thereâs always something in the sky that he has never seen.

Roger Berryâs home is nestled on a small acreage northwest of Indianola with a tranquil pond in the front and cornfields behind.

He and his wife enjoy the peace and quiet of the country life, but it is what he sees looking up that
makes him feel most at home. On a clear night, Berry heads out to his recently completed home
observatory and spends hours simply gazing at the sky.

âItâs an escape from the stresses of the day,â says the semi-retired, part-time firefighter and medic.

Berry had his first taste of astronomy in junior high science class with Mr. Morrison.

âI remember an experiment he had us do with a clear, half plastic bowl in which we tracked the sun at a certain time every day,â he recalls.

Fifteen years later, Berry ran into his old teacher and asked him what they were trying to accomplish with that experiment. It was to track the solar analemma, which is a graph plotted in a figure-8 pattern that shows the position of the sun in the sky at a single location and at the same time of the day throughout a year.

Berry was even more intrigued. He soon found Astronomy Magazine and started learning more
about stars and planets. He joined the Central Iowa Astronomers Club and did public talks and
presentations at Lake Ahquabi every other month. He enjoyed giving people the opportunity to look through the telescope and be mesmerized by the night sky.

Today, Berry is excited to have his home observatory set up for planet and star gazing. He
received it and two telescopes in exchange for helping sell equipment for a friend of a friendâs family. He, along with a couple of his buddies, rebuilt the structure and ran electrical so that Berry can attach a camera and computer to the 11-inch center telescope.

One of his favorite things is observing and photographing Jupiter.

âItâs dynamic and always changing,â he says. âThe great red spot on Jupiter is three times Earthâs
diameter. When you start considering the size, itâs hard to fathom that God created such a vast and amazing universe.â

His observatory dome is only 8 feet, so Berry mostly uses it himself. His goal next year, when he
buys a new camera, is to set up a monitor outside so small groups of people can view the images.

âIâd love to eventually work with homeschool families as part of their science curriculum,â he
smiles. âThere are all kinds of things going on in the night sky, and I just want to encourage everyone to get away from the city lights and explore.â ♦