Wonderlich home was a kit house 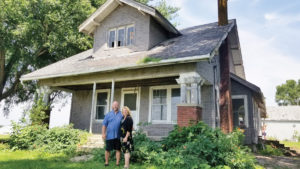 Bill and Jane Wonderlich discovered that this farmhouse was a Sears Roebuck kit home. Photo By Deborah Mikelson

Bill and Jane Wonderlich found interesting evidence the two-story farmhouse bungalow they started to demolish was a Sears Roebuck kit house. Bill found several shipping labels on the back of the oak floor baseboards they pulled up.

The house was located on the 7.5-acre property the two purchased at 5620 N.E. 12th Ave., Pleasant Hill, to build Premier RV and Boat Storage. They plan to build on the back 5 acres and sell the front acres to a commercial business.

Rosemary Thornton, author of âThe Houses that Sears Built,â gave advice on identifying if your home is a Sears home.

âLook for stamps or marks showing the millwork was shipped from Norwood Sash and Door of Ohio, a supplier of Sears millwork.â

The shipping label found on the farmhouse listed âSears Roebuck and Co., Chicago, IL.,â and the number 48, indicating the year it was shipped. The supplier listed on the label was âThe Norwood Sash and Door Mfg. Co., Norwood, Ohio.â It states âQuantity 70 Ft Base.â Routing shows it was shipped by train using âB&O c/o CRP (Baltimore & Ohio Railroad) and (Chicago, Rock Island and Pacific Railroad)â to Clarence H. Williams, and the destination was Altoona.

âWe knew him by Howard Williams, and he raised a lot of hogs there,â says See. âMy dad traded Howard for that home. I lived there only for 6-9 months with my wife and son. My dad was a trader. Dad bought cheap farms and thought he could make some money. My dad traded again, and we moved to a nearby farmhouse. He owned a lot of different farms. We rented that house out for years. I didnât care he tore it down. Every farmhouse I sold has been torn down.â

Bill looked online and thought the house looked like the Fullerton Model Sears plan. It could also be a version of the Sears Westly, which closely matches the porch columns, gable roof and windows.

According to searshomes.org, âThe Sears Westly was first offered in the very rare 1909 Sears Modern Home catalog, and, by 1914, this model had undergone a significant facelift and the new Westly looked quite a bit different from the old Westly.â

Sears Roebuck kit homes could be custom designed by the buyer.

âThe first floor had oak floors, while the second floor was built with pine,â says Bill.

The Fullerton appeared in the 1933 âLow Cost Homesâ catalog. According to the Sears archives website, âSears was not an innovative home designer. Sears was instead a very able follower of popular home designs but with the added advantage of modifying houses and hardware according to buyer tastes.â

Jennifer and David Shilling from Bondurant personally pulled up the floorboards, intending to use them in their home renovation. They donated doors, windows, and anything else that was salvageable to Habitat for Humanity. The farmhouse was demolished on July 6, and Bill used a large excavator to tear the last pieces down.

Premier RV and Boat Storage will have two climate-controlled storage buildings, says Bill, adding there will be 100 indoor and 100 outdoor spots. Over time, he envisions it to be full-service business, complete with a dump station, water-fill station and dumpsters. Another idea is to add a maintenance service for RVs.

Bill and Jane have fun memories of traveling in RVs with their kids, Cody, 19, a sophomore at Central College in Pella, and Austin, who was killed in a car accident four years ago. Bill has worked for more than 30 years in sales and customer service and has developed properties for five years. Jane has been a cosmetologist at Country Cosmo for 22 years. ♦