Itâs barely February, but I canât imagine 2023 will produce a more profound galley show than Scott Charles Rossâ Ukrainian Project at Moberg Gallery. Ross has made a career by showing the simple beauties of very likable old places like southern Englandâs coast and Quebec. Gallery owner TJ Moberg says Ross could live off his fishing boats alone. Last year changed the artist to his core.

âFeb. 24 did something to me. I was compelled to support Ukraine however I could,â said Ross.

He looked up Ukrainian students in central Iowa and listened to their personal stories. He studied every war photo he could find on the Internet. And he became personally involved in the stories, like this one from a teen named Constantine. 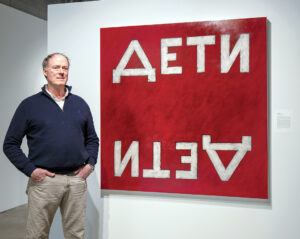 âBefore Feb. 24, all I was thinking about was how to make friends in a new place. On Feb. 24 I came home from wrestling practice and called home. I could hear the bombs going off. Boom, boom, boom. Mom said they were 10 minutes away, not to worry. All I could do was worry. I was unable to sleep for a long time because I was so aware of what all could change in eight hours. And I could not be with my parents. School kept me together during the day, but the nights were very bad.

âThe realization that life was never going to be the same again for any of us here in Iowa was overwhelming, but I decided to stay here and pursue and build dreams. It was not safe to go home, so my parents didnât want me to try. I met Scott six months ago, and he helped us realize that it was possible to do something to help,â he told a crowd at the art reception.

As Constantine and other students spoke, they were overwhelmed at times with emotion. Other Ukrainian students ran up to hug and support them. Some of the students were as young as 14 when Feb. 24 changed their worlds forever. All were on temporary student visas that would have expired by now if not for the work of Drake Legal Clinicâs refugee clinic. All visas have now been extended. Drake initiated the refugee service in October of 2022 with Suzy Pritchett as director. Rossâ war works are sold to support that program. The crowd, the largest ever at a Moberg opening, responded generously.

The art show is astoundingly emotional. Ross chose to do all but one piece in black and white, for obvious reasons. The singular painting in color is called âChildrenâ and recreates the Russian word for children that was inscribed in such large type on all sides of a theater in Mariupol that it could be read in satellite imagery. Yet the Russians bombed the theater to rubble, killing at least 600 people, many children. That is how Russia is saving Ukrainians from themselves.

Other paintings are of graves, grave markers in woods, bombed-out buildings, particularly churches and mosques. One of the bombed-out shells is of the Church of St. Nicholas the Miraculous in Novohnativka. It shows a cross on a turret holding up hope, if nothing else. That painting and others of churches, residential buildings and community centers stand out for their defiance of the grimness of this war, like William Butler Yeatsâ âa terrible beautyâ being born on Easter 1916. Some lessons are never learned. It is left to the artists and poets to remind us.