The other prodigy named Adele 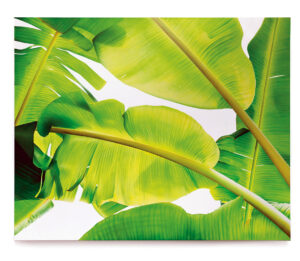 âLeaves of a Strange Berryâ by Adele Renault, on display at Moberg Gallery through Oct. 15.

Love her or not, Adele Renault makes people go bananas. Raised on a farm in the Belgian Ardennes, the painterâs musical family encouraged her to travel and experience the world on her own. So, at age 14, they sent her to Venezuela and then on to live in Brighton, England. During her travels, she studied visual arts from classical oil painting to modern spray can graffiti, both of which are obvious, somehow, in her work. She also developed a ken for new media and graphic design and graduated at age 21 from the AcadÃ©mie Royale des Beaux Arts in Brussels.

Following her instinct and desire to paint, Adele, now 34 (the same age as the other Adele) lives her vocation all over the world. She has done massive public murals in London, Moscow, Seoul, New Delhi, Jacksonville, San Jose, Sweden, Berlin, Salem, Mass, Puerto Rico, Des Moines and, of course, Hollywood, near her current studio. She even did a memorable mural for Ringside Lounge, a famous watering hole in Mike Tysonâs Jersey City development Tysonâs Corner. She has painted three series â people, pigeons and plants. In that Tysonâs Corner mural, she mixes it up with the boxer, his pigeon and his cigar. That mural is roof top, reminding me Adele is best appreciated from a birdâs-eye point of view.

Her people period featured a âWest Adamsâ series of photorealistic portraits of the vendors, âgangsters,â fruit vendors, tire and body shop workers, taco makers, hairdressers, coaches and chefs she befriended in West Adams, her new hood between the LA County Museum of Art and Crenshaw. Her pigeon series was also photorealistic and mostly head and shoulders portraits.

Her new theme is plant life, particularly bananas, which is the focus of her current, marvelous exhibition at Moberg Gallery, through Oct. 15. She has painted banana leaf portraits as tall as 40 meters on a South Korean chimney. One mural in London looks like banana fruits from a distance but, like all her bananas, it is just the leaves that captivate her.

She explained last year: âPainting plants has not been an overnight decision. The seed has been planted a long time ago, quite literally. As a kid I always helped my mum in her large vegetable garden, sometimes fun, sometimes felt more like a chore. But I was subconsciously gathering up all that information being passed down to me. And even though I lived most of my adult life in large cities… something along those lines sums it well: You can take the girl out of the garden, but you canât take the garden out of the girl.â

Renault said her only connection to Des Moines before she was invited here for a large-scale commission for a corporate client of Moberg Gallery was Joni Mitchellâs song âDry Cleaner from Des Moines.â She discovered the magic of banana leaves on that trip gazing at the Des Moines Botanical Centerâs bananas. She honors that experience with a piece in the Moberg show called âDes Moines Stacking Chipsâ about a Des Moines gambler in a casino. Green and red leaves become the exciting colors of a roulette table. As Moberg archivist Michaela Mullin writes of the Bananas show, âRenault paints the color of photosynthesis taking place; she renders protuberance and emergence, the height and heft of a sturdy shrub, where bananas â botanically classified as berries â grow in familiar clusters.â

This is a mesmerizing show by a brilliant young artist who is also a fearless, tireless, insatiable world traveler. n