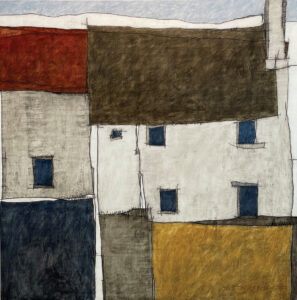 Sarah Grant and Scott Charles Ross are Des Moines painters with big followings. They have been paired together for years. They moved together from Olson-Larsen Galleries to Moberg Gallery because they wanted to paint bigger and show more frequently. Moberg has the tall ceilings to make that happen.

Grant is a towering presence in Des Moinesâ art scene, virtually its mama bear. She is the founder of Sticks, the internationally famous furniture and art company that has drawn scores of talented artists to Des Moines and provided them with good day jobs. Without her business genius, Des Moinesâ art scene would be reduced from what it has become.

Ross, as much as anyone, has turned worldly travels into line-driven paintings that move people into appreciating simple things, like Cornwallâs fishing boats, as something beautiful and inspiring. Cornwall is the legendary âLandâs Endâ of southwest England, and Ross has the vision to express that myth in things as simple as cliffs, houses and boats. Gallery owner TJ Moberg told me that whenever Ross expresses financial anxiety, he tells him to paint more fishing boats. The new show does include some new boats.

I have followed both painters for decades. That is long enough to have noticed that neither painter has been in such a happy spot of life as they both are now. It shows. Their paintings are more hopeful and less confusing. For instance, Grant used to paint red moons. In the new show, her âA Squallâ has a green moon. It also seems to lasso chaos with fire, black sky storms and smoke unable to daunt the green grass. I am reminded of Archibald MacLeishâs poetic refrain from J.B. â âIf God is good, He is not God. If God is God, He is not good. Take the even, take the odd. I would not sleep here if I could. Except for the little green leaf in the wood.â 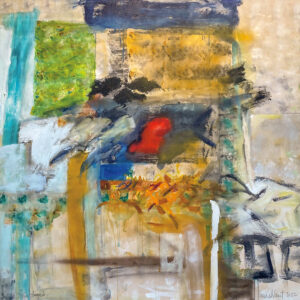 Grantâs Abstract Expressionism seems to be leaning more toward narrative rather than non-narrative proclamations. While one of her new paintings reminded me of MacLeish, gallery archivist Michaela Mullin writes in the exhibition program that her âDisrupted Landscapeâ inspired her to sing the Joni Mitchell (whose new channel on Sirius XM debuted recently) song âTurbulent Indigoâ about Van Gogh. âMake âem nice and normal. Make âem nice and neat. You see him with his shotgun there? Bloodied in the wheat? Oh what do you know about? Living in Turbulent Indigo?â

Mullin points out that Grant used to outline the rainbow colors of her brushstrokes in black. In âDisrupted Landscapeâ the black no longer contains, and the rainbow is unleashed.

Ross said his travels have been contained by COVID, but he has concentrated on new haunts beyond Landâs End â Italy, France and Quebec. Simple village buildings, particularly their thatched roofs, are expressed beautifully with Rossâ lines and rectangles. This show will be up through April 9. It will stand as one of the best of the year, and it might make you remember poems and songs.

Also one of the yearâs annual highlights, the Drake Student Art Exhibition is showing through April 15. This yearâs show is juried by curator Mitchell Squire, another massive presence in the making of Des Moinesâ art scene. Squire sees things that others miss. That has to be good for young artists.