David Dahlquistâs show opening at Moberg Gallery was also a retirement party for his administrative duties at RDG.

For the first time this fall, Moberg Gallery is showing two of Iowaâs best-known artists. Their November exhibition featured David Dahlquist, a man who has worn many hats very well. After a teaching career, Dahlquist turned to ceramics and eventually became the head honcho at RDG Planning and Design, the multidiscipline firm in Des Moines that has created projects all over America. Their Facebook page identifies them as âarchitects, artists, engineers, landscape architects and planners with a passion for design and a drive to make a difference.â After working on more than 80 public art projects across the country since 1988, including the well-known High Trestle Trail Bridge project and the Art-in-Transit program for the Iowa DOT, Dahlquist wanted to show his own work again, to return to the life of a studio artist. 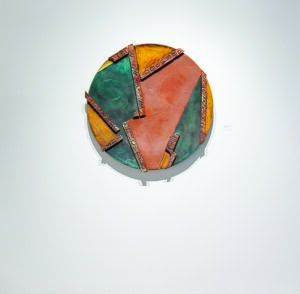 Dahlquistâs show opening at Moberg was also a retirement party for his administrative duties at RDG, as he is moving back to his clay origins. It drew the largest crowd I have seen in a dozen years of Moberg openings. The show was appropriately titled âFull Circleâ and paired Dahlquistâs giant ceramic sculptures with brightly colored paintings by Wendell Arneson, who was Dahlquistâs teacher and mentor in high school. Dahlquist quotes Hehaka Sapa from âBlack Elk Speaksâ to explain, âEverything the power of the world does, it does in a circle.â

Literature played an instructive role in all the works in the show. Dahlquistâs brother Daniel is a poet who keeps in touch, sending haiku to the artist. Most of the works in the show take their titles from those haiku. He calls his sculptures ceramic drawings and said they were about communication, in conversation with Arnesonâs new paintings.

Arnesonâs works have been exhibited at the Toledo Museum of Art, Groveland Gallery in Minneapolis, Wichita Art Center, and the Rochester Art Center, to name a few. He taught at  St. Olaf College from 1978 to 2015, where he specialized in painting (oil, acrylic and watercolor), drawing and color design.

Dahlquist describes himself as a âstoryteller who uses many different materials to draw people into a complete intellectual and emotional experienceâ and as âa translator, making connections for others searching for a deeper experience in their own lives.  Whether for a given location, an individual sculpture, or piece of pottery, the desire and intent are the same, they must first be understood and deeply felt by the artist.â

He also calls himself a âremembererâ willing to take viewers of his art âdown until they reach the river of collective memory.â Going down near a river is also how one finds clay. Full Circle again. Dahlquist even has a new kiln from Alfred, New York, where he graduated from New York State College of Ceramics.

Mobergâs December show will feature James Elwanger, an artist from Des Moines who dressed the city with some of its best public art, also mostly sculptures. For the last five years, he has hung his hats mostly in St. George, Utah, and Las Vegas, where he has been creating public art for new developments. Recently he moved to La Quinta outside Palm Springs. His show will open Friday, Dec. 3. That is the same date for the Fitch to have an open house for its many artistsâ studios.

Two of Des Moinesâ distinctive arts organizations have new directors. Ballet Des Moines hired Tom Mattingly from the Madison Ballet in Wisconsin. The Des Moines Gay Menâs Chorus promoted Eric Shepard of Des Moines who has been involved with the gay menâs chorus since about 2009, as a performer, choreographer and member of the board of directors. ♦