Surrealism was designed to horrify as many people as it amused. 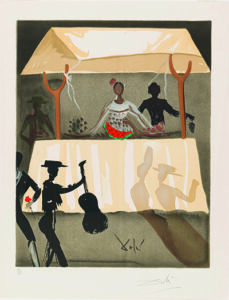 The Art Centerâs latest show is âFantasy Figures â Surrealistic Works on Paper.â Because surrealism was designed to horrify as many people as it amused, this show is both disturbing and entertaining. The Art Center describes the show in contemporary terms, âmysterious imagery, inspired by dreams, fantasies, and the unconscious, influenced not only generations of artists but writers and filmmakers as well as fashion, and game design.â

Dating mainly from the 1930s to the 1960s and featuring drawing, collage and various printmaking techniques, many of the works in this exhibition include takes on the human body. Faces expand and float, limbs twist and dance, and people turn into monsters, machines, animals and things in between.

The quintessential surrealistic Salvador Dali is thrice represented, with his takes on Judasâ deserved Hell from the ninth level of Danteâs âInferno,â and Bizetâs âCarmen from the Fourth Act.â The art represented here from that series happens before her assassination. Brit Leonora Carrington brings âCannibals.â American, and Max Ernstâs wife, Dorothea Tanning, throws us a âLâAubergeâ that makes the Eaglesâ Hotel California seem normal. Franceâs Leonor Finiâs âYouâll See If We Are Difficultâ presents a prelude to transsexualism. Swissman Paul Klee shows a dark, embryonic vision of âThe One in Love.â Rene Magritte demonstrates that Belgianâs vision of men with strange heads in weird hats. Americans Man Ray and Victor Obsatz contribute a selfie and a portrait of Marcel Duchamp. Joseph Cornell shows his vision of a âDurer Boyâ transfixed in time. Mark Rothko and Max Ernst are represented by series of their infatuations. Seven other artists, from six countries, bring visions of the strange and terrifying to the show.

The marvelous amateur actors of Des Moines Community Playhouse deserve some praise. That brings us to the world premiere of Thomas Hischakâs âEscaping the Labyrinth.â The author of 38 plays and 24 nonfiction books about theater, New Yorker Hischak personally attended the first three performances in Des Moines.

Labyrinth is a sweetly told story about a modern, mortal scholar who finds that he can interact with the gods and goddesses of Ancient Greece and Rome. Afterall, gods donât die because they are immortal. The scholar, played by Bartenderâs Handshake employee and local theater veteran Nick Cornelison, falls in love with Diana (Dee as a waitress in St. Louis), played by Playhouse debutante and UnityPoint R.N. Jillian Traskos. He chases her from the time he is a college student until he is an octogenarian.

This rom-com never went for a cheap laugh, and the ending was unexpectedly happy. The cast included two other impressive newcomers, Drake student Dottie Flener and autism behavior technician Shelby Dale, plus Ken Reams, a veteran of 80 local shows over 50 years. That is the beauty of good amateur theater â the mingling of old vets and rookies from all walks of life. The next Playhouse show will be âMurder on the Orient Expressâ in February.

Steven Vail Fine Arts has upgraded its staff in an effort to become a more public gallery. SVFA does most of its business with coastal investors, selling appreciable but affordable prints to people who buy art more because they think it has market upside because they like it.

The gallery has hired a new gallery director, Liz Grindle, and a new director of operations, Beau Grindle, both Wisconsin natives who are returning to Des Moines after years of prodigal travels and a successful career buying and marketing premium art glass materials. ♦