The most elaborate installation in years at the Des Moines Art Center runs through Oct. 24. 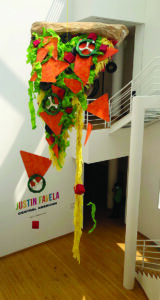 Justin Favela is a 34-year-old artist of Guatemalan and Mexico heritage who was born and raised in Las Vegas. That is a lot of stimulus to begin a career in the arts. Des Moines Art Center curator Laura Burkhalter first ran across his work seven years ago when visiting Crystal Bridges Museum in Bentonville, Arkansas. That museum, headed by Alice Walton, runs far ahead of its population weight in innovation. He was part of a âstate of the artsâ exhibition there. Two years later, Burkhalter saw more of his work in a Fridamania exhibition at the Denver Museum of Art. At that time, she started talks with him about a one-person show in Des Moines.

âJustin Favela Central American,â which runs through Oct. 24, is the fruit of her connection. The show took one month to install with the artist, his assistant, and five to 12 other specialists and students working. It shows. It is the most elaborate installation in years at the Art Center with entire walls of the Anna Meredith Gallery covered in paper collage made from pinata paper, plus floor art and a giant chandelier in the Meire wing.

âWhen he first talked to us about the show, his interest was mostly in the food of Iowa. When he discovered that taco pizza was a real thing and was invented in West Des Moines, he was fascinated. (Happy Joeâs Pizza claims to have invented the dish in the West Des Moines store in the 1970s.) Both the floor sculpture and the chandelier replicate taco pizza from Caseyâs, an Ankeny company that leads fast food stores nationwide in pizza sales.

âHe also told us that Claes Oldenburg was a big influence on his art, so we took him on a tour of Oldenburgâs art in Des Moines, including the âBig Green Umbrella,â â Burkhalter added.

The art center has several special events planned around the exhibition, which drew a large crowd to the opening. âNacho Noshâ is a lecture by Favela on Thursday, Aug. 19. It will be virtual via Zoom. A family fiesta on Aug. 21 will feature games, music, treats and art. In addition, Favela is teaching a paper plant making workshop in collaboration with New Mexico State University. The workshop is 25 minutes long and teaches the creation of paper plants with planters. One needs scissors, glue, paper, cardboard, tissue and a stapler. All workshop grads are encouraged to bring their paper plants by to be included in the exhibition.

âBe as creative as you want. I canât wait to see what you come up with,â said Favela.