From architect to artist

Latest show at DMAC is âManosâ (hands), a study of forearms and cupped hands made after JosÃ© Clemente Orozcoâs own left hand was amputated after an accident with fireworks. 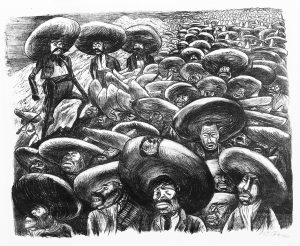 The latest show at the Des Moines Art Center is âManosâ (hands), which is also the name of a lithograph in the exhibition by 20th century Mexican artist JosÃ© Clemente Orozco. Produced in 1930, the print is a study of forearms and cupped hands made after Orozcoâs own left hand was amputated after an accident with fireworks. That led him to change his career from architect to artist. In his commentary, curator Jared Ledesma writes that the âdelicate presentation of hands is especially poignant considering his interest in depicting politically charged art that focuses on the labor force of Mexico.â

Indeed, many of the 30 prints in this show are politically charged and focused on manual labor. The most dramatic piece to my mind is Orozcoâs âZapatistas,â which refers to the army of supporters of the great revolutionary Emiliano Zapata. They are depicted as troubled, worried soldiers almost all with handlebar mustaches. In âReguardia,â that army includes women. These and other pieces in the show demonstrate the historic context of sombreros. Today they are mostly observed on Mexican restaurant walls, but, in Zapata and Orozcoâs day, they were essential protection from the harshness of the un-sheltering Mexican sky. Another Orozco work, âMexican landscape,â is dominated by human figures as if the artist is asking Berkeleyâs famous question, âIf a tree falls and no one sees it, did it really fall?â Rufino Tamayoâs âWoman with Treeâ and âWoman by the Seaâ cover similar ground.

Then we have a series of earth paintings by Ana Mendieta, the Cuban-born artist who went to high school in Sioux City and college in Iowa City. Mendietaâs art is often obscured by her notorious life â she was allegedly murdered by her husband, though a jury bought his defense that she just fell off her high rise balcony in New York. Her art is astonishing and her inclusion here is totally on theme. She makes sculptures in the earth with her entire body. One photograph of such depicts her as a carrot underground.

Miguel CondÃ© is represented in this show by two works from his noted âGuggenheim Suiteâ portfolio. The discussion accompanying the art says that the artist was interested in modernizing 15th and 16th century European feast paintings. His inspiration in these seems to be Goyaâs grotesque âCapricios.â One of these includes a typewriter to remind us that it is a modernization.

Graciela Iturbide was perhaps the greatest Mexican photographer of the 20th century. She is represented in this show by two of her most famous works. In âMujer/Angel â Desierto de Sonora, Mexicoâ she poses as a phantasmagoric woman trudging through a harsh landscape carrying what appears to be a boom box. In âJanoâ she photographs what might be a Day of the Dead celebrant who wears a mask over another mask. The title refers to the Roman god with two faces. Also included in the show is a photographic portrait of Orozco by the American artist Doris Ulmann. He looks rather like one of his Zapatistas.

Much art in the show reflects upon surreal possibilities. The Mexican American painter Enrique Chagoya presents his âReturn of the Macrobiotic Cannibalsâ which could be an inspiration for âThe Walking Dead.â Guatemalan artist Rodolfo Abularach is represented in the exhibition by one of his famous prints of the human eye, a subject with which he was obsessed.

Teresa Margolles is a Mexican artist who submerges herself in crime scenes and the consequences of death. In this show, she excavated wooden debris from the 2008 Szechuan earthquakes that killed 200 and injured 12,000. She mounts it on a pyramid of gold, enshrining âDebrisâ as precious jewelry. This brilliant show plays through Sept. 26. ♦