Jeremiah Elbel and the madness of crowds 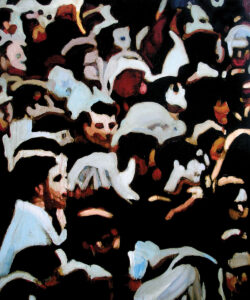 This column used to present a âbest and worst of the yearâ reckoning. Ten years ago, we declared a young Jeremiah Elbel the artist of the year. That honor was won by impressing us with bold paintings, often using tar as paint. The top painting in his repertoire, which was shown at Steven Vail Fine Arts, was called âCrowd Study 19.â After showing at Vail, it traveled to London, where it has been shown at various galleries and museums for 10 years. Last month, Vail announced it had returned home.

Because my contact with Elbel in those 10 years was restricted to seeing him in restaurants where he worked, and because âCrowd Study 19â is a painting of the people watching Martin Luther King, Jr. on the Lorraine Motel balcony as he was assassinated, I asked Elbel if I could visit his studio on MLK Day this year.

I walked into a converted garage attached to the artistâs house. It was packed with models of insects, dinosaurs, historic newspapers, Batwoman, bikes, paint cans and guitars. Elbel takes inspiration from many sources but mainly from the madness of violence. He has paintings and/or drawings of Kent State, 9/11, lynching, Dallasâ grassy knoll, the Titanic, and Guantanamo.

âI have always been attracted to violence. How does a crowd forget everything they ever learned and throw rocks? The ambiguity of not knowing whatâs happening is essential to me. The events of 9-11 made it an obsession. Goya was so obsessed with the idea of Saturn devouring his own children that he hung a painting of that in his dining room,â he explained, pointing to a framed copy of The Des Moines Register from the day after 9-11.

How did the 10 years since our last interview change Elbel?

âMore than anything, I learned to not take myself too seriously. I read an interview I did 10 years ago recently. I was quoted saying that I was fascinated by the fact that the world was destroying itself. That was too heavy, too serious,â he recalled.

Why was it I found him working at so many excellent restaurants?

âIn college, you learn that a career in art requires figuring out how to utilize your talent and monetize your art. I decided long ago that I didnât want to monetize my art. So, I worked in many restaurants. I like restaurants. Sean Wilson (currently at St. Kilda) likens a kitchen to a pirate ship. Itâs a collection of misfits and weirdos who somehow mesh in that environment. I also separated my painting and drawing from my graphic art skills. The latter make enough money that I can paint and draw what I want, not what I think people will buy,â he explained, showing me some work he has done for Uber, Yellow Cab, shows and movies.

Has he taken any other lessons from the food world to apply to art?

âYes, so much of both are utter crap. I hate the phrase âYou eat with your eyes.â Pretty plates should not matter; taste is all. When you start thinking about whether a painting will look pretty, you are lost. If it doesnât sledgehammer your mind, what worth does it have? I would rather take horror and extract some subliminal beauty from it,â Elbel explained.

What artists have influenced him the most?

âPhilip Chen (Drake art professor) was a big influence. Tara Donovanâs show at both the downtown Art Center (now gone) and the Greenwood Park museum opened my eyes. But no one has sledgehammered my mind like (Renaissance man) Mathew Barney. He does everything, even his costumes. Artists should make all their own stuff. The apprentice system bores me,â he said.

What is his attraction to tar?

âItâs easily manipulated. You can start with a single line, and the rest is erasure. That makes a painting more like a sculpture.â ♦