Salvaged submarines and the complications of ceramics 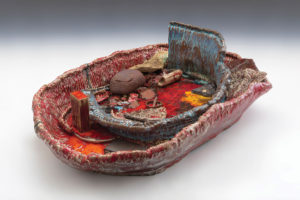 Des Moines Art Center (DMAC) is hosting one of its biggest shows in years, certainly in the view of the art elites. âSterling Ruby: Ceramicsâ does not disappoint despite its considerable hype. Ruby is an artist who works, thinks and dreams huge. He works with salvaged submarines for Godâs sake. What is that about, we asked.

âIt just happened. My studio is in an industrial park in Vernon, south of Los Angeles. One day I crossed paths with someone who had old submarines, so I negotiated with him, and now I am a salvaged submarine artist. I like to work big,â he responded.

His ceramics on display at the DMAC are big, bigger than any I have ever seen. Itâs not like they need supersizing to impress. They blow one away on several levels. The glazes dazzle. The colors can trip one out. How does he manage to create such stuff?

âI have 15 studio assistants, half in the studio and half in the office. Ceramics take the longest to create of all the media I work with,â he said.

Ceramics take so long because of the process and success ratio.

âOne out of three blow up. Wet clay ceramics dry a week or more, a month if we go to the kiln. We fill the basins with stuff I have accumulated over 20 years of collecting. Lead and cadmium are glaze basins, and ceramics rest a few more weeks after the glaze firing. Itâs all so filled with chance. You cannot observe the process, but thereâs magic in chance. We never know what we will get for the first two or three months with most of the big pieces we do,â he said, alluding to the DMAC exhibit.

What does Sterling Ruby think his of his work?

âI am bi-polar, so I am never sure who made what that has my name attached. I am extremely fortunate that some of my works sell so well that I can experiment with so many other things,â he said.

âSterling Ruby: Ceramicsâ plays at the DMAC through Sept. 9. In conjunction, through Sept. 2, âIn the Spirit of Louise Nounâ celebrates the late, great Des Moines activist who collected art of political artists ahead of their time. Noun collected contemporary art in the 1970s, 1980s and 1990s including fine examples of Minimalism by Agnes Martin and post-Minimalism by Lee Bontecou and Eva Hesse. She also acquired works by artists such as Barbara Kruger, Kiki Smith and Nancy Spero, which are unabashedly political, addressing feminism, sexual politics and social justice.

Kavanaugh Gallery has moved and is back where it began, on Fifth in Valley Junction. As they explained, âWe realized we had more art than spaces to hang it.â Among the treasures at the new space at 228 Fifth in Valley Junction are some newly acquired Mauricio Lasansky Kaddish pieces framed in metal and some Dr. Seuss originals. ♦