Aesthetics of earth and sky

Three artists deeply involved with the natural expressions of the universe. 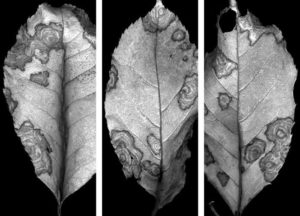 Organic Forms, at Olson-Larsen Galleries through June 9, features three artists deeply involved with the natural expressions of the universe. Laura Berman, a Catalonian who now is a professor at the Kansas City Art Institute, spent several years in the middle of nowhere. âThe Flint Hills region is a vast landscape of nothingness â no trees, no dwellings, no people â itâs akin to being out at sea. Out there, the distance between sky and land is very short and unmediated. I am equally mesmerized by the minuscule and the monumental â supernovas exploding into far away galaxies and ancient oddly-shaped pebbles that have never been touched before. My work reflects the connections between these expanses and details within space, and how even the smallest action can create a cascade of events and phenomena,â she explains in a statement for the show. 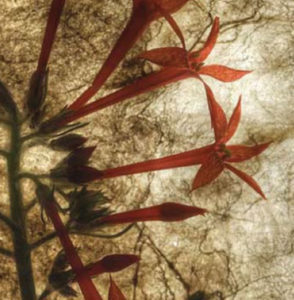 The monoprints in the show are full of the gay colors of her native Barcelona. The watercolor series titled âEarth and Skyâ reflects on the more elemental themes she encountered in the barren hills of Kansas.

Mary Merkel-Hess is a former Iowa farm girl who works mostly in homemade paper and natural dyes. Out of these, she sculpts basic forms of both the natural and manmade realms â towers, roundels, trees, homages to morning and evening, etc. Her works project a delicacy that one does not expect of her subject matter. Her colors are as elemental as those of a farming cycle.

Ken Smith is a former Iowan who lives in Washington state immersed in Japanese aesthetics. A photographer of the natural world, he focusses on small wonders. Leaves, stems, blossoms, seeds and branches are studied, often in a decaying form. Like most Japanese aesthetes, Smith celebrates transience in all its sweet and melancholic manifestations.

A new show at Artisan 218 Gallery in Valley Junction includes an arresting portrait of the late Des Moines orthopedic surgeon and artist Sinesio Misol by his widow Mary Kline-Misol. The latter has made a career out of painting portraits of famous and infamous subjects. Her series on Alice Liddell, the inspiration of âAlice in Wonderland,â so impressed the Lewis Carroll Society that they held their one and only non-European convention in Des Moines. She has done series on heroes of the Wild West and Victorian Era genius. At A218, she shows the portrait of Misol for the first time along with an older series of homeless characters. This is one of her very best portraits, catching both the deep humanity of the surgeon and the playful gleam of the artist.

In celebration of a new Yayoi Kusama sculpture at the Pappajohn Sculpture Park, the Des Moines Art Center is exhibiting four other Kusama sculptures in the Blank 1 Gallery through July 22. Kusama, celebrator of feminism, counter culture, polka dots and pumpkins, is an icon of the 1950s and 1960s who still is working today.

Also at the Des Moines Art Center, the print gallery is showing a collection of works by Grant Wood. âSultry Nightâ features prints that Wood did for Associated American Artists in the 1930s. That group sought to sell inexpensive prints through department stores and mail order catalogues. Woodâs prints were originally priced at $5, and he did 19 for the program. This show continues through June 24.

Hearty congratulations to Drake professor and printmaker Phillip Chen on being awarded a Guggenheim Fellowship. Chen, who is represented by Steven Vail Gallery, works in the tradition of the late Jules Kirschenbaum, a Drake art professor who let all forms of science, literature and philosophy influence his art as much as artistic inspirations. He is the only Iowan to win a Guggenheim this year. ♦