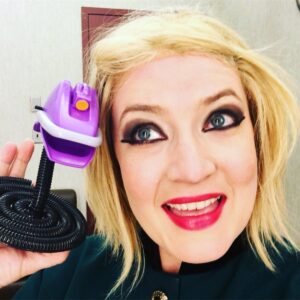 Since it started more than 30 years ago, the movie-mocking show âMystery Science Theater 3000â has had a number of homes. It started on the Minneapolis UHF station KTMA before moving to The Comedy Channel, soon after rebranded Comedy Central. It found another life on the Sci-Fi Channel. The show ended in 1999 but was revived by a 2015 Kickstarter that lead to two seasons on Netflix, which canceled the show in 2019.

The show that couldnât die is trying to revive itself again with another Kickstarter to fund a 13th season and The Gizmoplex (an MST3K-centric online theater), which ends Friday night. Among the cast is Jewell-native Rebecca Hanson, and her husband, Drake grad Tim Ryder.

Since the show has returned to Netflix in 2017, Hanson has played Sythia, a clone of Mary Jo Pehlâs Pearl Forrester character from the original series, as well as voicing robot GPC (formerly known as Gypsy). Ryder portrays Bonehead No. 1, a henchman, and voiced robot Tom Servo during two live tours. Both Hanson and Ryder write for the series.

âEven watching as a student in Iowa, especially in the late 1990s, to see something that was made in the Midwest just blew me away,â Hanson said during a Zoom interview from her and Ryderâs home in Los Angeles. âI would see the Hopkins, Minnesota, address pop up and be like âOh, I know where that is!â I just had never seen things I was that familiar with on TV. As a comedian and an Iowan, it made me think âMaybe I could do something like this someday.â â 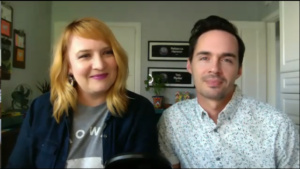 The opportunity to do something exactly like this first came up when Hanson and Ryder met MST3K creator Joel Hodgson in Chicago in 2013. Hanson and Ryder were performing with Second City at the time and saw Hodgson, and former MST3K cast members Trace Beaulieu and Frank Conniff on a panel at the Museum of Broadcast Communications. When they approached the comedians after the show, Hodgson recognized Ryder from a Second City show the night before.

Hodgson, Hanson, Ryder and the casts of Second City got together for dinner the next night, and Hanson and Hodgson sat next together and bonded over both having worked at the Valleyfair amusement park. A few months later, Hodgson was appearing at WizardWorld Chicago and asked Ryder if Hanson could assist him for the day. At the end of the day, Hodgson asked Hanson if she and Ryder would be interested in writing for MST3K if the show ever got up and running again.

âWe were going down an escalator, and I was tearing up,â Hanson said. âI was like (sobbing voice), âYeah, that would be cool, Joel.â Cut to getting home and Tim asked âHow did it go?â I said âIâm going to tell you this, Joel Hodgson said if MST3K ever gets back up and running would we want to write for it? I think he was just being nice. I have to acknowledge this, and then we have to let it go. Could you imagine? But no.â â 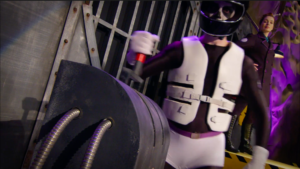 When the Bring Back MST3K Kickstarter launched in 2015, the couple backed it, and it went on to become the then most successful movie & TV Kickstarter in the crowdfunding siteâs history (since surpassed by Critical Role). After the Kickstarter ended, Hodgson called to ask them to not only write but appear as characters on the show. Hansonâs performance as GPC is notable because the character has been female since the show premiered in 1988 but was always voiced by men.

âI really love GPC. It sometimes bothered me that she was the only female character (in regards to the bots) and she was kind of dopey,â Hanson said. âShe was definitely a mother figure in some ways, too. I wanted to update her in the sense that she can hang with these boys, and she can play along with them, but she still has stuff to do.â

The Letâs Make More MST3K Kickstarter wraps up Friday with a six-hour marathon, with the goal of raising $5.5 million dollars to fund 12 episodes, 12 riffed educational shorts, and the Gizmoplex. Hanson and Ryder have been involved with various special events, including virtual watch parties with current and classic members of the cast. But mostly, theyâre still excited as fans of âMystery Science Theater 3000.â

âItâs really great,â Ryder said. âDoing these livestreams has been really fun. I did one the other night that was a room full of Servos. It was myself, Conor [McGiffin] from the live tour, Baron [Vaughn] from the Netflix series, and J Elvis [Weinstein], the original Tom Servo along with Joel, just watching an old episode and hanging out and talking with each other. Weâre not involved a ton in the behind the scenes planning, which is probably for the best. But just to be along for the ride is super fun. I will say that weâre both still backers, because weâre fans and we want it to happen.â

Letâs Make More MST3K & Build The Gizmoplex Kickstarter
When: Through 10 p.m. Friday, May 7
Where: makemoremst3k.com