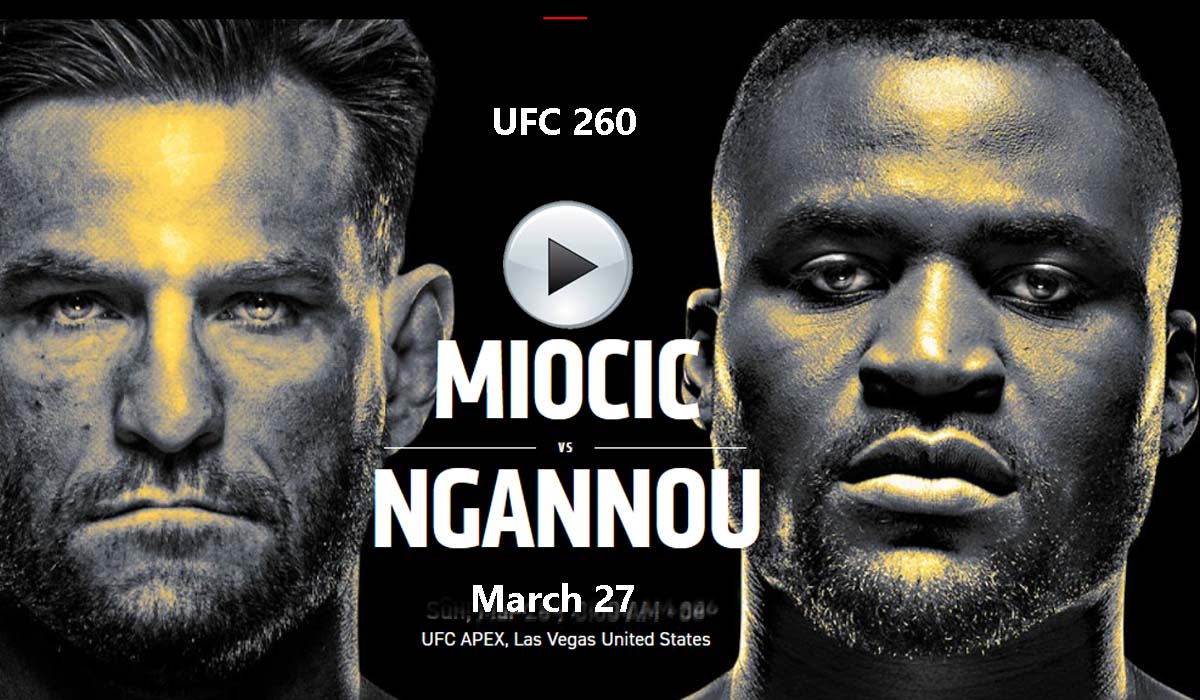 Stipe Miocic and Francis Ngannou run it back for the UFC heavyweight title on Saturday night in the main event of UFC 260.

The baddest man in the UFC will be determined on Saturday night at UFC 260 when heavyweight champion Stipe Miocic puts the gold on the line against Francis Ngannou from the UFC Apex in Las Vegas, Nev. Miocic and Ngannou clashed a little more than three years ago at UFC 220 in January 2018 with Miocic dominating from start-to-finish to win a lopsided decision.

Since their initial outing, Miocic has fought three times, winning two of those contests against Daniel Cormier, including winning via unanimous decision at UFC 252. The part-time firefighter from Ohio feels Ngannou has improved and wants to remind people that he hasn’t sat around and rested on his laurels.

“It won’t be nothing like the first fight because he’s definitely gotten better, and so have I,” Miocic told MMA Fighting. “A lot of things are going to change. I’m trying to make it a more one-sided fight, and of course, try to end it early, but he’s gotten better. The man hits hard, and it’s the heavyweight division, so anything can happen.

After losing to Miocic, Ngannou lost his next fight in a lackluster outing to Derrick Lewis at UFC 226. From there, Ngannou went on a stunning run. He’s won his last four bouts via knockout in a combined time of two minutes and 42 seconds to earn himself another crack at Miocic.

Has Ngannou improved enough to be able to dethrone Miocic? Or does Miocic use his wrestling as he did in the first matchup and avoid the hands of Ngannou to win once again?

Here’s everything you need to know about UFC 260: Stipe Miocic vs. Francis Ngannou 2.

UFC 260: Stipe Miocic vs. Francis Ngannou 2 takes place on Saturday with the early prelims kicking the event off at 6:15 p.m. ET, before the pay-per-view main card begins at 10 p.m. ET. Miocic and Ngannou should enter the Octagon at around 12:15 a.m. ET, depending on the length of the undercard bouts.
UFC 260 TV CHANNEL, LIVE STREAM

In the United States, the PPV price for UFC 260 for current ESPN+ subscribers is $69.99. New subscribers have the option of bundling an annual ESPN+ subscription and the fight for $89.98. The first half of the preliminary card can be seen on ESPN+ at 6:15 p.m. ET before switching over to ESPN at 8 p.m. ET.

More details about how to watch in other countries can be found at UFC.com.
WHERE IS UFC 260?

The card will be held at the UFC Apex in Las Vegas. The UFC has held their recent U.S. events at the Apex with no audience due to current COVID-19 protocols. Miocic competes at the venue for the second time while Ngannou has never competed at the facility.
UFC 260 FIGHT ODDS