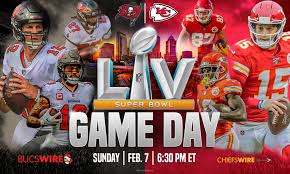 Itâs here, the moment of truth: Super Bowl LV. For the first time in Super Bowl history, the home team will be playing in their home stadium for the big game, as the Kansas City Chiefs head to Tampa Bay to play the Tampa Bay Buccaneers. This game is also featuring two of the greatest quarterbacks to ever play this beautiful game, with the Chiefs having Patrick Mahomes, who is looking to win his second Super Bowl in just three seasons as a starter, and the Buccaneers having Tom Brady, who is looking to win his would-be-record seventh Super Bowl and his first away from Bill Belichick and the New England Patriots.

Fact to Know: Tom Bradyâs washed still got it.

Brady has certainly been one of the best quarterbacks in the NFL this season, finishing the regular season tied with Ryan Tannehill for the third-highest EPA per play (0.304), only trailing Aaron Rodgersâ 0.415 and Patrick Mahomesâ 0.358 and currently having the third-highest EPA per play in the postseason (0.308), only trailing Patrick Mahomesâ 0.496 and Baker Mayfieldâs 0.327.

Itâs not just the advanced numbers that look good for Brady either. Brady had 4,633 passing yards and 40 passing touchdowns in the regular season, both of which were his best in several years for the regular season, with his last passing yards total that high coming in 2015 and his passing touchdowns total being the second-highest of his career behind his historic 50 touchdown season in 2007. With the postseason included, he has 5,493 passing yards, his highest since 2017, and 47 passing touchdowns, tied for the second-highest of his career. Based on statistics, this is easily one of the three or four best seasons of Tom Bradyâs illustrious career, especially if he ends it with another Lombardi Trophy.