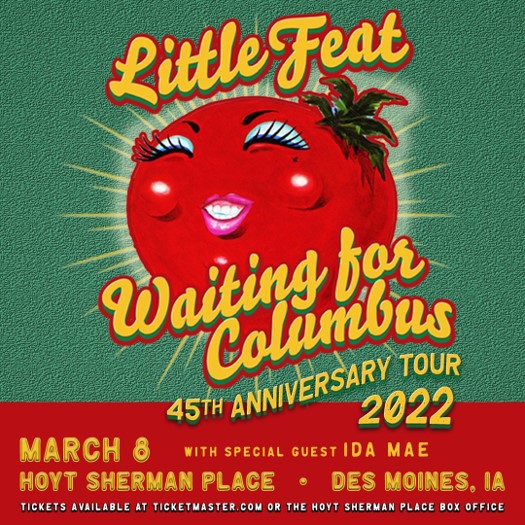 Making a truly great live rock and roll album is an enormous challenge, so difficult that they are a rarity. Waiting for Columbus is a consensus member of that very exclusive club.
After two years of Covid-enforced silence, Little Feat has big plans for its return to the stage. Hard on the heels of their November âBy Requestâ tour, they are planning a March-April 2022 tour that will celebrate the 45th anniversary of the legendary Waiting for Columbus, replicating the album at every stop including at Hoyt Sherman Place on March 8, 2022. Tickets go on sale this Friday, October 22 at 10:00 AM at the Hoyt Sherman Place Box Office or Ticketmaster.com. Tickets are reserved seating, $45, $59, $79, and $95, and a limited number of VIP packages will also be available.

Jerry Garcia once said that making a studio album was like building a ship in a bottle; with skill and oceans of patience, you could make something beautiful. But playing live and recording it was like being on a ship in a raging storm. Featâs trademark blend of California rock, funk, folk, jazz, country, rockabilly, and New Orleans swamp boogie rested on a base of improvisational skill and jazz-based chops that made their live shows special, and on Columbus those abilities are on triumphant display.

In August 1977, the band brought along a recording team to four shows in London and then three in Washington, D.C., and they captured sonic gold. Backed by the Tower of Power horn section, with whom theyâd recorded Feats Donât Fail Me Now, they romped through extended versions of a stellar song selection that included âFat Man in the Bathtub,â âSpanish Moon,â âDixie Chickenâ, âSailinâ Shoes,â and âFeats Donât Fail Me Now,â as well as the iconic truck driverâs lament, âWillinâ,â the song that got Lowell out of the Mothers of Invention and gave birth to Little Feat. Generations of listeners have worn out the original vinyl, and the digital world will carry that heritage forward.

Hearing it again is something every Feat Fan looks forward to. Itâs time to lace up your dancing shoes.