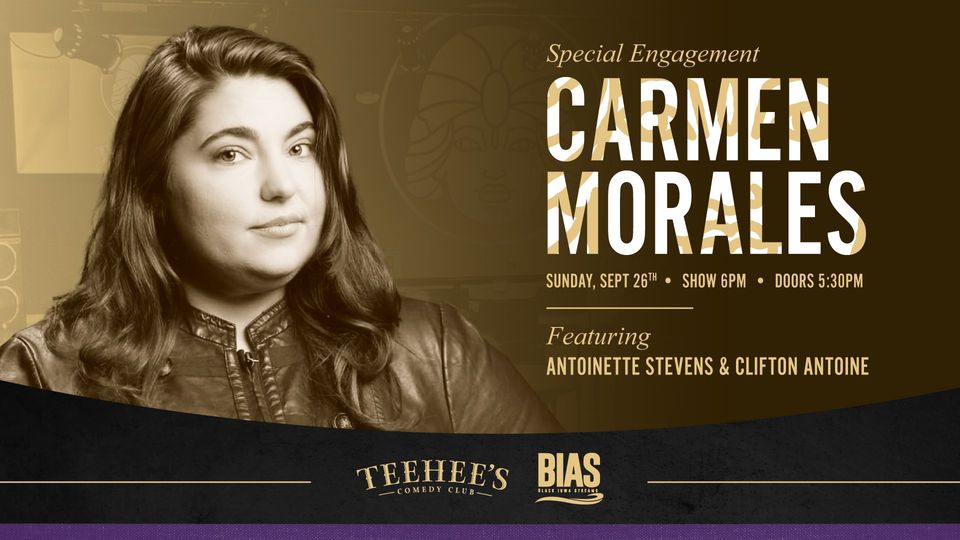 On Sunday September 26th, Teeheeâs Comedy Club proudly presents Carmen Morales for a special engagement show. Carmen Morales has a captivating style which incorporates opinionated quick wit and outlandish characters. Taking from family, friends and people from everyday encounters she transforms into these characters seamlessly, then adds hilarious commentary which leaves the audience doubled over in laughter. With a perfect combination of like-ability and vulnerability she has been well received by audiences internationally. She’s been seen on two seasons of the tv show “Laughs” on Fox and heard on Sirius XM radio in the U.S. and Canada. She’s also been featured in Gilda’s LaughFest Comedy Festival, the World Series of Comedy, Scruffy City Comedy Festival, Women of Comedy Festival, in the New York Times and has produced her own traveling comedy show, The ‘Not Your Average Broads of Comedy’ as well as performed in comedy clubs, colleges, strip malls, indie shows, dive bars, towns no one has ever heard of and military bases across the country. This show will also feature Des Moines comedians Clifton Antoine & Antoinette Stevens.

Doors open at 5:30. The show starts at 6:00. General Admission tickets are $15. Reserve your seats or tables now at teeheescomedy.com. Check out the hilarious Carmen Morales this Sunday night!