Once upon a time, toward the beginning of Des Moinesâ timeline and very near what is now the cityâs heart, a cluster of churches once stood around the space still occupied by St. Paulâs Episcopal Cathedral at 815 High St. The 45-story skyscraper known as 801 Grand and the Principal Financial Groupâs corporate campus now occupy much of this territory, but for two decades or so at the start of the last century, seven religious bodies (six Christian churches and one Jewish synagogue) perched themselves atop this hill to collectively go by the unofficial title of âPiety Hill.â

âI donât think it was meant irreverently,â says John Zickefoose, although the origin of the term seems to be lost to history.

Zickefoose works for St. Paulâs as an administrator and has taken a special interest in this block and its hallowed history.

Piety Hill, as defined by Zickefoose, was the one-block area bounded by Eighth Street, to Pleasant Street, to Ninth Street, to High Street, as well as any that touched this space. He says, while many now consider this block to be near the cityâs core, back then, it was on the outskirts of town.

Why so many religious institutions planted themselves so closely together is a bit of a mystery to Zickefoose. Not only did it draw these seven to within his narrowly defined area, but several others were also located closely nearby.

Sunday mornings must have been a spectacle. If each of the seven churches hosted an average of 300 parishioners, thatâs more than 2,000 well-dressed central Iowans packed into a relatively small area. 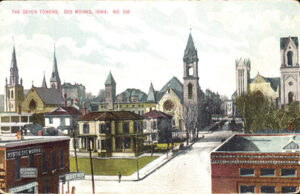 The aggregate effect would have dazzled even the modern senses. St. Paulâs, for instance, might have the largest repository of this type of original stained-glass windows anywhere in the country, according to Zickefoose. If the other churches maintained anything similar, there would have been an abundance of dazzling light.

Adding to this display would be the various church bells ringing. A carillon is a bell tower with 22-plus bells, according to St. Paulâs website. There are only three others in Iowa. St. Paulâs is the only one still housed within a church, but all the churches on Piety Hill were likely ringing some sort of bell apparatus.

âAnd what about parking?â Zickefoose wonders.

Cars were somewhat of a rarity at the start of the Piety Hill period, but not as much toward the end. Many people probably walked from nearby residential areas, and others might have ridden horses, but horses take up space, too.

Whatever the allure of Piety Hill was, it must have dissipated by around 1920, according to Zickefoose, who posits that the popularization of the automobile might have inadvertently led to its undoing. With an influx of cars populating downtown traffic, an unsafe âYâ shaped intersection existed at Eighth Street. The city rectified the situation, in part, by asking Plymouth Congregational Church to move, which it did, to its current Des Moines location at 4126 Ingersoll. At the completion of the ensuing exodus, St. Paulâs stood alone upon its lofty perch, although several other churches also remain in the area. ♦

For more information regarding Piety Hill and other interesting topics, Terrace Hill Partnership presents the following speakers in the Terrace Hill Drawing Room at 2 p.m. each Saturday in February. Tea and treats will follow the presentation. All proceeds benefit the gardens of Terrace Hill. For tickets or other details, visit teaandtalkcreativeprocess.eventbrite.com.