By Jeff Pitts with Jennifer Owensen 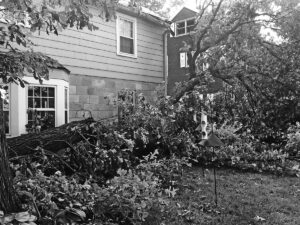 No one named Duncan has lived there in nearly three decades, but neighbors still refer to Jenifer Owensonâs 83-year-old Waterbury abode as âThe Duncan House.â The home was built by the family of arguably the best football player in Iowa history, Randy Duncan. It has seen its share of changes through the years. The teal-painted steps leading to the basement have been refurbished, the walls separating the dining room from the kitchen have been opened up, the grout and tiling in the upstairs bathroom have given way, and even the âlifetimeâ slate roof was eventually replaced.

Some things have endured, though. The hardwood floors were covered for a period of time but were refinished and continue to impress, as do the arched doorways in the foyer, and passersby regularly take note of the seven large oak trees that were planted well before the homeâs foundation was laid.

âWhen I heard sirens, I was convinced it was merely a test of the emergency system,â says Owenson of Des Moinesâ day of the derecho. âSurely a storm was not approaching since the skies were sunny and blue.â

But as the alarms continued wailing, and the sky grew dim, Owenson noted that her solar-powered outside lights were flickering, even though it was the middle of the day. She knew this was no false alarm.

As the derecho winds gusted, untethering objects and then tossing them through the air, Owensonâs old oak trees swayed, and the bigger branches appeared doomed. When the onslaught ended, downed electrical wires and debris cluttered the ground in all directions. Chainsaws roared and generators hummed. Polk Boulevard, known for its Sycamores that line both sides of the street, had taken a beating. Massive limbs obscured travel, and trees had been ripped from the ground â roots and all.

âIt had appeared that our old and treasured trees had somehow persevered through the storm unscathed,â marveled Owenson, âand we considered ourselves fortunate.â But six days later, as a windless day had almost ended â without so much as a hint of a slight summer breeze â CRASH, BOOM, BANG!

The Duncan House was under attack, or so it seemed. The walls rattled, and the structure shook, as wall hangings went askew and the glass chandelier chattered noisily.

A giant limb had fallen from one of the big oak trees, felled by gravity. First the branch fell onto the roof, and then it continued its descent, scraping off shingles and siding before tumbling onto the air-conditioning unit and the sandstone patio. At least it missed the neighborâs SUV.

âIt was unnerving to know that, for several days, the branch had lingered, hanging tenuously, and, without warning, finally relented,â remembers Owenson. âAs COVID continues…some of us still work remote, the holidays seem to be on the ropes, smiles are obstructed by masks, and we long for normalcy. I look at that tree in my yard. It is like many of the trees in the neighborhood, scarred and looking weary. Yet, it still stands as a much needed symbol of grace, resiliency and invincibility. By looking at that tree, I know that life will go on as it has before and after.â