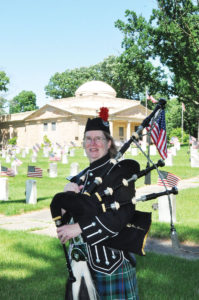 Dawn Baldwin practices at Glendale Cemetery in Des Moines. The audiologist and musician used to play other instruments, but she picked up the bagpipes to the delight of her neighbors.

âSomeone on our street…has been playing the bagpipes lately, and I love it!â writes one northwest Des Moines neighbor on an online community forum.

â…I heard her practicing, (too)…â types another interested ear in the area.

âIâm not sure who it is,â responds a third, âbut itâs greatly appreciated!! Very cool.â

Other neighbors also added comments and accolades, each wondering how to best witness the intriguing tunes, until finally…

âI am the bagpiper,â Dawn Baldwin writes. âIâm glad you enjoy it (the music)!â

Four years ago, Baldwin listened as her husband lamented that his band needed a bagpipe player but couldnât find one.

âMaybe I could learn the bagpipes and help him,â she remembers thinking. âHow hard can it be?â

Baldwin must have vocalized those internal thoughts, because a few days later, a new instrument arrived in the mail â one that was quite unlike any other she had previously played. She now owned a set of practice pipes. But it wasnât love at first bagpipe. Learning the new skill was difficult at first.

âI actually thought I shouldnât be doing this,â she remembers.

Playing the pipes requires a unique ability. The woodwind instrument is equipped with a bag to supply an enclosed reed with a constant reservoir of air.

âItâs like having a third lung,â she says. âPlus, there are only nine notes, but you canât play the same note back to back, and the music must be played from memory.â

Despite these few obstacles and some early troubles, Baldwin attended an international bagpipe conference in Kansas City. While there, as luck would have it, she won a brand new set of pipes in a raffle. Now there would be no turning back, and she is glad for that.

After four years, Baldwin has a good handle on the instrument.

âOnce you get the gist of it, it is pretty easy,â she explains.

She currently plays with Mackenzie Highlanders Pipes and Drums, with a mission to support active and reserve military units, law enforcement agencies and fire departments. The group regularly performs in a variety of patriotic observances, commemorative ceremonies and funerals, particularly for first responders.

The pipes are a loud instrument, which means Baldwin often goes outside to practice.

âPeople say they are the only instrument that can probably wake the dead,â she says.

Be that as it may, Baldwin frequently plays at Glendale Cemetery in Des Moines, which is where she caught the attention of her neighbors.
âI am just glad people are enjoying the bagpipes,â says Baldwin. ♦