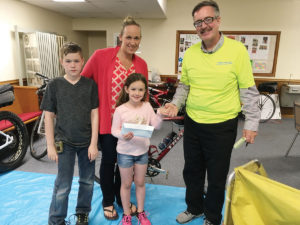 âSo there was one cold rainy night about five years ago, and I found myself with a crazy man with a backpack full of burritos and some fruit and some water and we were looking for homeless people…â

How did this happen to Curt Carlson? Several years prior, Joe Laslo â a co-worker and friend â approached him, asking for a minute to talk.

Laslo was Dumbfounded and wondering what to do next, but he didnât receive further explanation from above. As such, he did what anyone would, he did a Google search.

Online, Laslo learned of a Memphis seminary school student known as âPastor Tommy.â While pondering how to complete a social justice assignment for a class, Tommy thought, âWell, I love biking, and I have a good burrito recipe,â thus Tommy started delivering burritos from his bicycle to the homeless.

âThatâs what Iâm called to do here,â thought Laslo.

Originally working on his own, Laslo delivered 30 or so burritos his first night out and was encouraged by the results. Thatâs when he decided he needed to expand.

âMy mom always said, âRoll up the windows and look straight ahead,â when we go through this (certain) neighborhood,â remembers Carlson.

Now here was Laslo, asking him to ride directly into these same types of neighborhoods on a bike and loaded down with burritos.

But there he was on that cold and rainy March night five years ago, lured by Lasloâs infectious enthusiasm and eccentric exuberance.

âWe rode downtown and we found some people and asked if theyâd had supper,â he says.

At first they received skepticism and confusion, but the two pressed forward.

âIf youâre hungry,â they reiterated, âwe have some burritos. Next thing, you know, weâre laughing and joking and having a good time and trading names. It was so gratifying. People were just moved to tears that some stranger would want to come up and feed them and find out their name. It was just an awesome experience.â

That meant the burrito-slinging duo would return the next week. And the next. And the next. Urban Bicycle Food Ministry – Des Moines became a weekly event, 52 Thursdays a year, barring crazy weather or other circumstances.

The food preparation originally took place at Lasloâs house, but after receiving permission from John Deere â both of their employers â they moved the culinary operations to the engineering lab. As the ensuing aromas wafted throughout the building, their co-workers started following their sniffing to find the mouth-watering origin.

âWeâd tell people what weâre doing,â remembers Carlson, âand the next thing you know, theyâd say well, âIâll give you some water,â or, âCan I ride with you?â One by one people started coming and joining us.â

Most of the food is donated or bought with donated money.

âThat first year, enough people started joining us that we had to break into two teams,â Carlson remembers. âThen Joe ran into someone with Capitol Hill Lutheran Church who offered the churchâs space and year after year this crazy thing just kept on growing.â

Currently, about 60 volunteers gather at the East Village church to make the 700 burritos and 200-300 sandwiches â either peanut butter and jelly or turkey and cheese â to be delivered by eight teams â most adorned in the groupâs signature yellow shirts.

âSo many people have said, âWe get through the winter because you come on Thursday and Joppa is here on Saturday with heat for our tents, and somebody comes and feeds us on Sunday. Thatâs the only way we get through winter.â â

The nonprofit group welcomes any who are willing to serve, regardless of religious beliefs.

âWhen you go to give, you often get so much more in return,â says Carlson. âNow I show up and the volunteers are all friends, and they are all salt-of-the-Earth kind of people that show up with a giving heart. So every Thursday it is fun to just come and meet my friends and hang out with some really wonderful people.â ♦