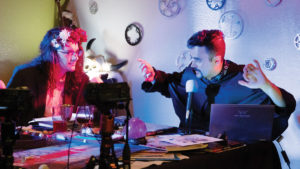 Local dungeon master Paul Privitera produces a role-playing podcast at Des Moines and Dragons, a ârolling initiative with the funniest druids, warriors, rogues and wizards in the Midwest.â For more information, visit www.desmoinesanddragons.com.

Maybe you pretend that Earthâs oceans have flooded, the ice caps have melted, the skies have emptied and dry land no longer exists….

Or that WWIII brought about nuclear Armageddon, and youâve tunneled underground in order to survive an onslaught of radiation, and now you have to beat back unfriendly competition for resources of many varieties….

Or maybe you are serving on a star ship under the command of Han Solo, and you and your friends go galaxy hopping while doing dangerous smuggling missions for intergalactic pirates….

What is a dungeon master?

âIn Dungeons and Dragons, you have players and a dungeon master,â explains Privitera. âThe players and the dungeon master are working together using the rules of D&D to craft a story. So itâs sort of a hybrid between an improv-style game or storytelling experience with an RPG (role-playing game) based rule set.â

A good dungeon master helps spin a compelling story, while also enforcing pre-ordained rules as the gameâs referee. The players generally play as a team against the dungeon master, who is most often painted as the villain.

âThe dungeon master is all of the characters that arenât the players,â he explains.

Winning a role-playing game often looks different than winning at other activities. The end can be a moving target.

âItâs not really a game you win,â he says. âBecause the goal is to tell your story. I suppose you win when you and your friends, or whoever youâre at the table with, feel like the story has come to its natural conclusion.â

People with pocket protectors, Casio calculator watches and taped-up eyeglass frames are welcome at Dungeons & Dragons games, but none of the aforementioned are a prerequisite. Privitera says D&D is not exclusively played by âwhite nerdy malesâ between the ages of 14 to 20, as the common stereotype suggests. All walks of life are welcome, and other than the polyhedral dice and rulebooks, nothing out of the ordinary is necessary to play.

âStorytelling is naturally engaging,â he says. âI think people enjoy (role-playing games) because itâs a way for them to craft narratives that are important to them. We live in a pretty tumultuous time where we donât always know whatâs going to happen day by day. So itâs a nice way to feel like youâre in control by crafting a narrative yourself.â

The games can be done via the Internet, but in-person play is sometimes preferable.

âReally this is just about getting together with your friends, sharing a beer and slaying orcs,â he says. âItâs really about community and being around people you enjoy having a good time with.â

A typical D&D game lasts four hours, but they frequently run twice that long, or they can be much shorter.

âYou canât get any better than on a crappy day outside, getting all your friends to bring over some beer and junk food, and just sitting in a basement for like six hours and just going nuts.â

If someone is interested in going nuts at D&D but doesnât know how to begin, Privitera puts out a podcast that can help called Des Moines and Dragons.

âI really feel like people are getting screen burnout and are tired of staring at phones and screens all the time,â he says. âGoing to a place with friends and just having a good time, complaining about your boss, and also rolling dice and slaying orcs is just really cathartic.â ♦