Ex-convict serves heaping plates of home cooking to the hungry. 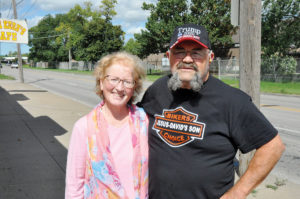 Every second Sunday of the month at 1:30 p.m., Bykrmark Carver and his wife, Karin, serve meals to anyone who is hungry at or near Central Iowa Shelter Services in downtown Des Moines. Photo by Jeff Pitts

Itâs an indisputable fact: Bykrmark Carver (formerly known as Mark Carver) used to be a bad man. Indeed, this truth was confirmed by a jury, adjudicated in a court of law, and if you ever meet him, be ready, because there is a high likelihood you will hear this same truth straight from his own mouth. Carver was a bad man. Thatâs who he was.

âMy mom tried to abort me,â he states matter-of-factly. âWhen I was a kid, my dad molested and abused me, and he was a preacher. So I didnât believe in God. He said preaching was a great way to make money.â

Carver admits to mostly cheating his way through school as a kid and to generally being a problem for authority for the next couple of decades. And after he endured four heart attacks in one year, his bad behavior became amplified.

âI got wild and crazy,â he remembers. âAnd my wife left me for my fishing buddy, and I took my guns over to their house â I was a bad biker then â and I pulled a big .357 Colt Magnum full of Full Metal Jacket Hollow Point Magnums.â

No injuries came about, but angrily unholstering a loaded gun while hollering at people with blood in your eyes almost always leads to legal issues.

âThey charged me with attempted murder and got me for (two lesser charges): going armed with intent and assault to do great bodily harm.â

âWhile I was in prison,â he says. âGod turned me around in the middle of the night.â

Feeling the weight brought on by the guilt accrued from a life of bad actions, Carver yearned for forgiveness, but there were too many past evil deeds to remember them all.

âI didnât say in 1969 I did this, and in 1971 I did that,â he says. âI said âLord forgive me for what Iâve done.â And thatâs when the whole world that Iâd been carrying on my shoulders come lifting off.â

During his first year out of prison, Carver logged 30,000 miles riding his motorcycle anywhere and meeting with anyone willing to listen to his thoughts on Jesus Christ. Visiting mostly prisons and juvenile homes, he says he helped young people change directions, and he aided ex-inmates with their quest to reacquire their voting rights.
Carver has tried preaching from the pulpit, but he says he isnât suited for that traditional style of spreading the word. Instead, his labor consists of working with inmates, helping troubled youth, and, every second Sunday, along with his wife, Karin â he is remarried â they serve the homeless while passing out Carverâs home-cooked heaping plates of comfort food. The couple is joined by a growing number of friends, family and volunteers. He estimates that his group feeds 100-300 people each month.

If you are skeptical of Carver, that is perfectly reasonable. All too often, we the people have been bombarded by feel-good stories and peppered with âHallelujahs!â and âAmens!â and âCan I get a witness?â Skeptics and non-skeptics alike, almost everyone nowadays has heard a story that sounds too good to be true involving âJesus freaksâ claiming to be born again. Skepticism is Americaâs unofficial favorite pastime, and thanks to his father, Carver understands that as well as anyone.

But whatever you believe about Bykrmarkâs conversion, and whatever the truth is in regards to his ultimate divine judgment, he hopes you believe this: If you are a bad man or a bad person doing evil acts, you donât have to stay that way. ♦