Thursday, May 13, 2021
Join our email blast
Your Neighbors

Painting a picture with yarn 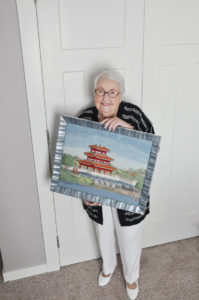 Joyce OâBrienâs fiber art âpaintingâ depicting the Iowa State Capitol hung in Gov. Terry Branstadâs office from 2011 to 2017. The piece, titled âIowa Hub,â was later transferred to Congressman David Youngâs office, and it is currently on display in the office of Iowa State Senator Jack Whitver. Photo by Jeff Pitts

âI made it up,â says Joyce OâBrien. The 95-year-old is referring to her unique brand of âpaintingsâ that donât require paint. âI call this fiber art. It is a unique treatment of artwork that uses Persian wool as my medium instead of oil or water colors.â

Born in 1924 in Mingo, OâBrien moved to Des Moines after graduating from high school at 16 years old. The young professional worked downtown for Bankers Trust by day, and she admits to frequenting Babeâs during the evenings. It was at this nightclub that she met the man who would eventually become her husband. He was stationed in Des Moines with the Air Force.

After their nuptials at the end of WWII, the OâBriens returned to Iowa to reside in his hometown of Cedar Rapids. While growing the duoâs salvage-yard business, extensive travel was sometimes necessary, and that often meant lengthy intervals of downtime. Never one to keep idle, OâBrien had an idea. She previously worked with oils to paint, and she had a love for needlepoint.

âI needed something to do,â she remembers. âA little light went off in my head, and I thought, âWhy not make my pictures with yarn instead of oil?â â

The first fiber art creation was done in 1965. OâBrien captured the image of the Roman Coliseum. Each of her masterpieces is of an image of a prominent landmark.

âI do these completely freehand,â she says. âLike youâd paint a picture except using yarn. I use needlepoint canvas. Persian wool is my medium. Each picture takes me from 450-700 hours to create. It is very tedious, and it takes a lot of time.â

If other people use her same fiber art technique, she has never heard of it. To her knowledge, she is the originator of the craft.

âIâm painting a picture with yarn,â she says.

One of OâBrienâs fiber art originals, âIowa Hub,â portrays the state capitol and has graced the walls of some of the stateâs highest ranking officials, including the offices of Gov. Terry Branstad, Congressman David Young and Iowa State Senator Jack Whitver. Another one of her pieces, âdiâmoin,â is on display behind the Des Moines City Council during meetings.

OâBrien has only sold her work once; she prefers to keep this a hobby. But because of the massive effort it takes to create one of her pieces, she does like to share them with others.

âI want to know that people get pleasure from looking at them,â she says. âThat is my main objective of making them. That other people can enjoy them and get pleasure out of viewing them.â

There is one piece in particular she would like to be on public display. The image is of the Robert D. Ray Asian Gardens gazebo that is located downtown on the Raccoon River.

âI will donate it to the City if it is put out someplace in Des Moines,â she says. âI want it out someplace where people can see it, and I would certainly donate it.â

OâBrien might appear to be no more than 60 years old, but she has attained a nearly a centuryâs worth of experience and wisdom. As such, it might behoove central Iowa to listen when the artist speaks.

âHang my pictures,â she says. âJust so people enjoy them.â ♦