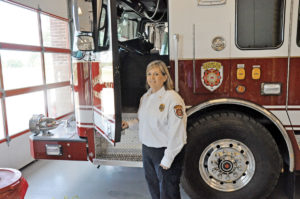 Pleasant Hillâs City Council voted unanimously on June 11 to hire Jamie Xayavong to serve as Fire Chief. She is the first female to work full time in this role. Photo submitted

Of the 30,000 fire departments in the United States, about 150 of them have a female fire chief â according to womeninfire.org. Less than 5 percent of firefighters are female.

On June 11, Pleasant Hillâs City Council voted unanimously to buck those trends as it hired Jamie Xayavong to serve as its full-time fire chief.

Xayavong is the first female to work full time for the city in this role. During her 13-year tenure with the department, she worked her way up, going from
lieutenant to captain, and then she served as interim acting fire chief for the past year before earning the full-time designation.

As interim chief, Pleasant Hillâs fire and paramedic staff transitioned from 12-hour shifts to providing round-the-clock, 24-hour services with paramedic and EMTs. In addition, the chief helped launch the design process for extensive upcoming building renovations, which she hopes to continue during her tenure.

Donât get the wrong idea.

âI am not that sit-behind-the-desk chief,â she assures. âI will be the working one. Iâll be in the ambulance. I will be on calls. Iâm not going to sit at my desk and let everybody else do the job. That would not work for me. I stay very active.â

Public service has been her passion from early in life. When asked as a youngster what she wanted to be when she grew up, she almost nailed it.

The new chief notes that the City of Elkhart has a volunteer female fire chief, but there are no other full time female chiefs in the metro.

âIâm the only one,â she says, adding that ReylonMeeks served as fire chief in a part-time capacity for Pleasant Hill before her.

When Xayavong isnât wearing her chiefâs hat, she is a lot like everybody else. The mother of three will soon be adding another person to the family.

âMy 23-year-old is going to have my first grand baby,â she says. âItâs a girl. We are so excited.â

That excitement hammers home her reasons for going to work each day. Pleasant Hill residents donât often experience major house fires â most incoming
emergency calls are for emergency medical services â but firefighting is a dangerous occupation, and fires do happen. As chief, Xayavongâs most important
mission is clear.

The City of Pleasant Hill is served by the Polk County Dispatch, which alerts the Pleasant Hill department regarding emergencies. The department responds to calls for structure, vehicle and grass fires, and provides emergency medical services such as: the rescue of people from water and ice; controlling releases of hazardous materials; extricating people from vehicle collisions and overturned farm equipment; and treating and transporting injured and ill patients. Pleasant Hillâs fire station is located at 5151 Maple Drive in Pleasant Hill. ♦