Thursday, May 6, 2021
Join our email blast
Your Neighbors

Major Finken rediscovers herself through pageant. 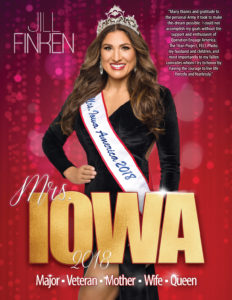 When Mrs. Iowa Jill Finken competed at the Mrs. America pageant in August in Las Vegas, it is quite likely that she was the only contestant who is a mother, wife, lawyer and major in the National Guard, with a deployment to Afghanistan and air assault training under her belt.

Sitting at her desk at Camp Dodge, dressed in fatigues and combat boots, hair pulled tightly back and not a trace of lipstick on, Major Finken seems far from the beauty-pageant type. And, having never participated in a pageant prior to the Mrs. Iowa one, perhaps she wasnât.

Prior to starting full-time at Camp Dodge in 2014, Finken had experienced things that few do. She had graduated from law school at Drake at the top of her class, had rappelled from helicopters, and had returned from her deployment in 2011 to rebuild a life that was much different from the one she had left.

âI couldnât go back to the law firm,â she says. âI just needed to start over. It was hard to go back to my old life.â

She went from working for a Fortune 1000 company to handling sexual assault cases on three reservations under the U.S. Attorneyâs Office for the District of Nebraska.

âItâs a job you can only do so long before you get burned out,â she says.

Her next job would be at Camp Dodge, where she would be working when she turned 40.

âBeing 40 hit me harder than I thought it would,â says Finken.

She began reflecting on what she hadnât done and what new challenges she still wanted to tackle. A passing thought she had had after meeting a former Mrs. Iowa took root and grew. She knew that she wanted to prove
to herself that she could do something that was completely out of her âcomfort zone.â She would enter the Mrs. Iowa pageant.

âI heard that voice again â if I donât think I can do it, I have to,â she says. âAfter being in a combat zone, I just donât want to be controlled by fear. I couldnât let my fear of not being pretty enough stop me.â

For Finken, the pageant allowed her to express parts of her personality that she often canât as a military officer â and allowed others to see her differently as well, including her children, Trevor, 10, and Brooklyn, 5. She and her husband, John, who is also in the military, have been married 11 years.

âI felt single-faceted,â says Finken. âI had taken on the military persona even outside of work. I needed to work on finding my more whimsical side. Iâm not the best at relaxing or showing emotion. I really needed to focus on the other side of me that Iâve neglected.â

Her time in Afghanistan serving with the 2/34 Infantry Brigade Combat Team meant she had to be in military mode non-stop, and that changed her, she says.

âI really felt I was a different person. I became a lot more serious, reserved in my emotions. It takes a long time to process what I went through.â

When she returned home, her family greeted her with a welcome home banner that had a family photo on it.

âI hated to look at it. I was smiling, relaxed, carefree in that photo,â she says. âIt was time to find that person again. People may not realize that mask doesnât just come off when you get back.â

As Mrs. Iowa, Finken doesnât have to make appearances, but she has partnered with Operation Engage America to help educate the public about veteransâ issues, including PTSD, suicide, homelessness and the need for quality healthcare.

âSupporting veterans on their own journeys is very fulfilling,â she says.

She adds that her experience as Mrs. Iowa has improved her conversational skills, âThe thing I never anticipated was that I would be able to talk to veterans in a more informal way. Iâm more engaging as Mrs. Iowa than as Major Finken.â

Her time in Afghanistan has taught her the importance of living life to the fullest â including entering the pageant world at age 40.

âSoldiers who have died for our freedom would want us to take every opportunity to enjoy what we have,â she says. âThe best way to honor those who have given their lives is to live life fiercely and fearlessly. This is my personal way of honoring that.â ♦