Welcome to the library 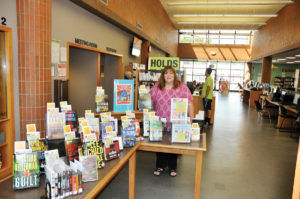 Habitually smiling and looking to assist patrons, Tina Brooks has clerked on the front lines of the Des Moines Public Library for
nearly four decades. The library clerk has worked at multiple Des Moines locations. She currently offers her customer service
to North Side Library patrons.

âThere is no more shushing at the library,â informs Tina Brooks. The long-time library clerk then pauses, ponders and decides to improve her statement.

âThere is a lot less shushing,â she says. âWe are respectful of the people who are working, so occasionally we do ask people to be quieter, especially with cell phone usage.â

Brooks began working at the Des Moines Public Library in 1977 as a 16-year-old part-time employee. In 1979 she went to full-time hours, and in all, she has worked at three Des Moines Library locations â downtown, south, and currently at the north Des Moines branch.

A clerk is different than a librarian. Achieving the title of librarian requires a higher and more specific level of training. But whatever you call Brooks, her passion is for serving information seekers, and she says her craft is definitely different than when she began nearly four decades ago. Before Google, incoming callers requested many hard-to-find answers: âWhat are the names of Santaâs reindeer?â … âWhat are the names of the seven dwarves?â … âWhat are the seven wonders of the world?â

âIt is amazing what you can find in a World Book, or World Almanac and a dictionary,â she says.

But her services werenât all about settling bets. Her department used to be equipped with two walls packed full of phonebooks from cities all around the map. A Rolodex organized this phonebook information. Brooks often helped people needing a floristâs phone number in Overland Park, Kansas, or anywhere. Sometimes they needed these numbers because of a funeral, or maybe it was Christmas or Motherâs Day. Without Google, the library was the easiest way to get such information.

Stamping date due cards and operating 16mm film projectors used to be part of the gig. She also remembers operating the old bookmobile. Nowadays, people need computers and Internet access. She says that is the biggest change she has seen.

âIâm happy the library can provide that service,â she says.

Some things are the same, though. The library still uses the Dewey Decimal System. And anyone is welcome at the library, the same as ever. Cost isnât even a barrier to entry. She likes that helping people is her primary occupation.

âIf Iâm having a bad day, all I need to do is look up,â she says. âI see positive everywhere I look.â

The library offers a diverse range of services. Homeless people come in to get warm. Hungry brains come in to get filled. Students work to make themselves better. Moms and dads have the opportunity to encourage youngsters. Bilingual speakers improve. Movies, music, art and free entertainment are all around the library, but Brooks remembers her best moment on the job, which occurred two years ago.

âI watched this little girl…,â Brooks pauses to choke back tears. Then she tells of a mom and a dad who brought in their daughter. The little girl was deaf and attempting to learn sign language at one of the libraryâs programs. The girl was struggling, and watching the faces of her concerned parents was heartbreaking, but after awhile, the girl began putting words to signs, and the whole world began to change.

Retirement looms for Brooks, but she isnât ready yet.

âWho gets to say they are still happy going to their job after 39-plus years?â she asks. Then she answers her own question. âI do.â

How much longer for Brooks?

Library work is important to her, and she says a lot goes on behind the scenes to make a it run properly. Service people are needed, reference people, people to put up displays, people with spark, people who are good with children and people with a heart for people.

What type of person is Brooks?

âI got the heart,â she says.