Tuesday, May 11, 2021
Join our email blast
Your Neighbors

All things are as they should be 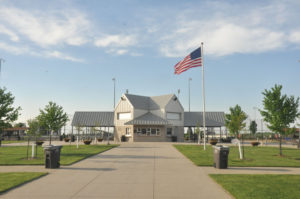 Daisy Duke shorts adorn various customers of both genders as they wait in line for concessions at the Greater Des Moines Softball Park. The sun beams through an American flag whipping in the warm summer wind. The hand of an 8-year-old tightens on the leash of her poodle as the pooch eyes a strangerâs Polish sausage. Backpacks protruding with softball bats are strapped tightly to passersby as they welcome teammates and slap high fives. âInglorious Battersâ is stenciled across the front of one teamâs uniform. âDirty Soxâ adorns anotherâs. The classic rock playing on the PA system is occasionally interrupted by taunts of âBY YOU!â ringing out in the distance â meaning someone ripped a hit by the other teamâs infield. And behind the stainless steel countertop at the concession stand is the smiling face of Lori Wolfe. All things are as they should be at the cityâs softball fields, as Wolfe easily fields all incoming requests for food and drink.

âBlue Gatorade,â orders one thirsty someone. After he leaves, an umpire asks for a glass of ice water to sip on. Next up, a woman buys a Salted Nut Roll. For 30 years, Wolfe has worked an 8-to-5 job somewhere else, but for these previous two decades, she has filled her nights and weekends behind the concession stand.

Ever wonder what sells the most at ballfields?

â(Our best seller is) probably our pizza pockets,â Wolfe surmises. âBut our big hot dogs and Polish (sausages) are up there, too.â 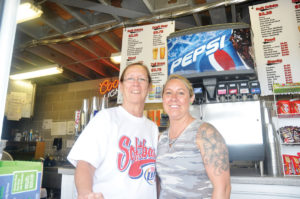 Meat nachos are another top seller, but Wolfeâs personal favorite is the Polish sausage. Her co-worker and niece, Jen Roth, prefers something she developed by using her own culinary aptitude: pizza pockets stuffed with jalapenos with melted nacho cheese drizzled on top.

Wolfe has nothing but nice things to say about the people who surround her. Most of them, she regards as âlike family.â

Many of her actual blood relatives have worked alongside her. Off the top of her head, Wolfe lists her son, daughter, husband, nieces, sisters, cousins and even a great nephew. Her employer might as well be family, too.

âDavis Concessions has been open for 40 years this year,â says Wolfe. âGeorge and Sandy (Davis) treat us like familyâ¦ Theyâre good people.â

She says the same thing about her customers.

âYou get a lot of the regulars coming in all the time, and itâs good to know them,â she says. âIâm real good friends with a lot of them.â

Each night, the excitement inevitably overflows from the action on the field, injecting the air with electricity.

âWhen people get home runs or when they are in tight games,â says Wolfe. âYou can feel it.â

But after the games are over, Wolfe canât generally tell which customers won and which lost. She canât tell by the look on their faces nor by what someone orders. She says slow-pitch softball isnât really about winning and losing. Itâs about time with friends, being with family, getting outside and, of course, eating the concessions.

All things are as they should be at the softball fields, including the smiling faces on both sides of the stainless steel countertops. ♦

A wedding on Field No. 4
Lori Wolfeâs best moment during her 20-year tenure at the Des Moines Softball Park was attending the wedding of a concession stand customer. Elizabeth and Richie Velez were married May 4, 2013, on Field No. 4. Snow was on the ground, no umpires were calling balls and strikes, and the concession stand was closed, but the couple put a mark in the win column anyway.