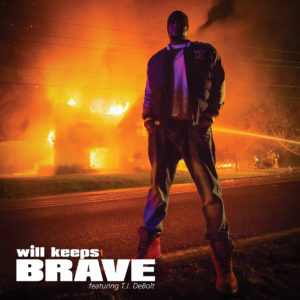 Local rap artist Will Keeps has done it again, only this time, local firefighters are the heroes featured in his latest video.

The Des Moines Science Center hosted the release of âBrave,â a video collaboration that Keeps began seven months ago with Kris DeBolt and the Des Moines and Urbandale fire departments.

âI said, âHey, whereâs the love? Why not do something with the firefighters?â says OâKeefe. âWhen Will heard this, he was all into it, and seven months later, here we are.

âWhen I watched that video with Will and the police, I really understood his role in the community as an activist,â he says. âHe cares about the role of firefighters in Des Moines, Urbandale and the whole country. We get called to peopleâs homes and businesses and are not there to judge, but to help serve the community and share our skills. We share with the community some of the worst days of their lives.â

Keeps says he was honored that the firefighters wanted to include him in such a worthy project.

âWhen they reached out and asked if there was something I could do featuring firefighters, I was all in and said, âLetâs get it done.â For them to want me to be a part of this and show what they do was just beautiful,â he says.

The message delivered through the video is intended for everyone, says Keeps.

âWhen people see that someone with a do-rag on their head and scars on their face can do something like this and work together with the community, hopefully it will be inspiring,â says Keeps. âWe need to get together and get things done to promote more love and positivity. We gotta do what we gotta do to come together, bring peace and be brave. I really think this is a great video for a great cause.â

OâKeefe says that the men featured in the video did the area fire departments justice in showing the caring nature of firefighters.

âFirefighters would rather go into a burning building than be on camera, so it was fun watching them adapt to the shooting of the video,â says OâKeefe, filmmaker. âIt was shot at Station, #3 with the guys that were coming on duty that day. They had to simulate their morning and just do what they normally do. They did a great job working on this video,â he says.

Tony Merrill, Des Moines firefighter at Station #3, was one of the crew members filmed the day of the video shoot.
âI happened to be on duty that day, so I got to be a part of it. We didnât get any calls while they were shooting, so it was nice we could get it done without any interruptions,â Merrill says.

Orlando Vivone, III works with the Fire Prevention Bureau as a fire inspector and was at the âBraveâ video release.
âI thought the video was well put together and necessary to show the public what we do,â he says.

Chris Bolten, trainer with the City of Des Moines Fire Department, says that the video is a great effort to help bring the community together.

âThe video shows a typical day at the station and how things can change in a split second when you get a call. We never really know what we are going to be walking into,â he says. âThis is a unique way to reach out to kids and inspire them to maybe become firefighters, or just to be brave like firefighters. You have to be brave to do this job â and brave in life as well.â

Keepsâ video has already proven to have a positive impact on the life of one brave Des Moines middle school student.

When Penny Mackey of Des Moines learned her niece Makayla was having suicidal thoughts after being bullied at school, she immediately took action. Mackey knew about child advocate Will Keeps and the work he was doing at various schools in the Des Moines area.

Mackey had met Keeps through her efforts to cofound a nonprofit called ECT to help with prevention, awareness and treatment of drug addicts.

âHe showed us support in what we were doing,â Mackey says. âI reached out to Will and explained what was going on with Makayla. He said he would be going to the school later that week and was going to have a talk with Makayla. A couple days later, Will called and asked if Makayla would like to be in his video. I knew she would be excited. Her mom said she didnât quit smiling for a week.â

Keeps says he is happy with the changes in Makaylaâs life since her involvement with the video.

âBeing in this video has inspired her to be stronger,â he says. âThat made me feel good and made me feel that what I am doing is really helping and making a difference. It empowers me to do more. Makayla felt so good about herself being a part of thisâ¦ Even the kids that were bullying her and saw her in the video have started to show her some love. The whole project gave her strength in herself and helped motivate her to be stronger and to survive and to thrive.â

Keeps makes a connection between Makaylaâs experiences and the topic of the video.

âIn her life, metaphorically, she was in a burning building,â he says. âThat little girl was in the fire with the bullying. We helped her out of that fire, just like the firefighters go into the fire and save people. We have to continue to save these kids from the fire.â

Mackey, who was also in the video as part of the starring family, concurs that the âBraveâ production has been a positive experience for her niece.

âWe loved being part of the video and showing support for our firemen,â she says. âIt also meant a lot to be supporting Will Keeps. He is doing great things and is helping to make a difference.â

Also in the video were Mackeyâs boyfriend, Robert Kenoyer, and another child, Kennedy Luncsford.

âKennedy has known Will in the past from him advocating at her school,â says Mackey. âHe has left a positive impression on her life as well. Being a part of the âBraveâ video has made a positive impact on Makaylaâs life. It has helped a lot with her self confidence and inner strength to fight off the emotional and mental battle of being bullied.â ♦