Where in the world is Coach Carter?

Climbing the ranks and never giving up 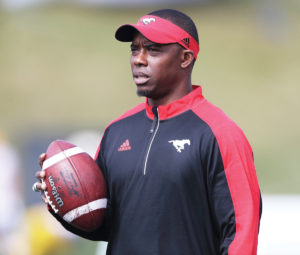 Kahlil Carter has been part of championship teams at the high school and pro level. Football hasnât always been all roses for Carter. He had to walk on at the University of Arkansas after high school, but he has climbed the ranks and recently earned the title as defensive coordinator of the Montreal Alouettes. (Photo courtesy of www.stampeders.com)

âThis coach has swag,â says Kahlil Carter, as he describes himself. âSwag is about something you are, not something you wear. It is a belief in yourself, and Iâve always had to believe in myself.â

âFrom being a walk on, to being a professional football player of 10 years, to now being a coach of 10 years, Iâve always had to believe in myself,â he says. âBecause sometimes you donât get the rep.â

Along the way, Carter picked up a masterâs degree, learned French and played professionally on two different continents in at least three different countries.

âIâve probably played for more teams in my career than anybody in history,â he says.

Carter made the rounds during his 11 years of arena football, Canadian football, NFL Europe, and he even spent time with the Buffalo Bills organization.

But where in the world is Coach Carter now?

âI spend about eight months in Canada,â he says. âOn and off, and on bye-weeks I come home to my wife. Then I spend three to four months in the Des Moines area (during the offseason).â

The coach was recently hired as the defensive coordinator for the Montreal Alouettes of the Canadian Football League. But he insists that Waukee is his home.

âI am an Iowa coach,â he says. âI coached at Graceland. I coached at Valley. I coached the Cedar Rapids Tigers. I played for the Iowa Barnstormers. And I coached at Drake for three years.â

âYou go through the lifestyle, money, women, alcohol, clubs and the whole nine,â says the coach. But these things donât fill you up; instead, they tear you down.â

This wasnât the first time Carter had a decision to make.

While growing up in Little Rock, gang violence was all around him.

At 19, Carter became a dad. His love for his daughter gave him the strength to go to school, get an education, be a father and make the right choices. But he knew he could be better.

Continually moving each year throughout this playing tenure, Carter craved a wholesome home base.

âI wanted to go back to just being not only my momâs son, but back to being one of Godâs children.â he says.

âMy mentor, the guy who found Kurt Warner, told me to come here,â Carter remembers. âHe would give me the coaching to be a great coach. He said Iowa would be a great place to start over.â

While playing for the Barnstormers, Carter learned to coach, and the second phase of his career has blossomed, taking him back on the road. But Carter says his heart is planted in his adopted home sweet home.

âSmall towns, low traffic, low crime, great schools,â Carter rattles off some things he likes. âIâve got two daughters from my previous marriage, and I met my now wife here. I fell in love with her, just being here with her family and in the culture of Iowa was something I wanted to hold on to. So we have two daughters of our own here. Itâs the perfect fit for the lifestyle Iâm living now.â

Hereâs to the man in the mirror looking at Coach Carter. ♦