7 yards and then happily ever after 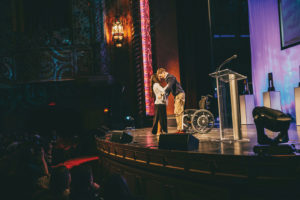 Eight weeks into his freshman football season at Luther College, Chris Norton dove to make a tackle while covering a kickoff.

âChris, get up,â he heard his teammates saying. But he couldnât.

Severe harm had never been a real threat before to the 18-year-old kid from Altoona, but even though he didnât know it yet, his whole world had just changed.

âI felt like I was just a head,â he remembers.

Unable to feel anything below his neck, as he was being carted away he heard the crowd begin to clap politely. Norton was an optimist, a glass-half-full kind of guy. He figured he just had a stinger, and that he would soon be fine. But as he attempted to acknowledge the crowd by giving a thumbs up, despite his best effort, his thumb didnât budge.

Once in the ambulance, the EMTs didnât mess around. And it was when Norton heard them arranging a life flight helicopter to the Mayo Clinic in Rochester, Minnesota, that he realized this was more than a stinger.

That was 2010. Norton had suffered a severe spinal cord injury. After a successful surgery, the best news the doctors could give him was that they were uncertain about his future.

âEveryone is different,â they told him. âWe just donât know.â

But they did know the statistics. For others with similar injuries, only 3 percent had regained any movement below the neck. And as for walking again? He could pretty much forget about it.

Focused on recovery, Norton ignored the odds. He ignored most of everything other than rehab, and he went to work on treatment.

âWhat can I do to get better?â he asked himself. âI didnât worry about where Iâd be in a week, a month, a year. I just focused on today.â

The goal was to walk again. Even if it was only one step.

As a strong safety on the football field, speed was an asset for Norton. Unfortunately, at best, his therapy would be arduous and slow. Only a week earlier, taking a single step was so simple. Now it seemed like the distance to Mars. He went to work anyway.

Three months were spent training intensively while at Mayo. Next he continued that treatment while living in Rochesterâs Ronald McDonald House. After six weeks, he felt something, and he miraculously wriggled his toe. During the ensuing months, the feeling spread, and he started gaining strength in his legs.

The following year, Norton was able to return to class at Luther College. He had a business management degree to attend to. Taking a full load of classes, while only able to type with his pinky, plus doing 20 hours a week of physical therapy, wasnât easy. But he made friends, he did well in school, and in 2013 he met his girlfriend.

Walking across the stage at his commencement ceremony became his goal. And when the time came, he hadnât considered the reaction heâd get from the spectators. Heâd never forget being unable to move his thumb the last time heâd been in front of a large crowd. But things would be different this time.

The day before commencement, Norton surprised his girlfriend, Emily Summers, and she agreed to be his wife. Emily would be the one on stage with him, arm in arm, helping him take each careful step across the stage in his attempt to fulfill the dream heâd spent so many hours working toward since the injury.

Once upon a time, Norton was told he would never walk again. He beat the odds, and on May 26, 2015, he went even further, stepping across the stage, finishing what he set out to do. The crowd went wild, and a video of his walk went viral on YouTube, numbering 300 million views.

But that isnât the end of Nortonâs story. Since the commencement, he has co-authored a book called âThe Power of Faith,â he runs the Chris Norton Foundation â a nonprofit helping others with similar health issues, and he does public speaking.

After moving to Florida, Norton opened his heart and his home to foster children. He currently fosters five, and heâs had 11 different children in his home at various points in time.

Nortonâs attitude, effort and purpose demonstrate that with the right mindset, people can overcome almost any obstacle. Now an adult, this former Iowa boy vows to walk seven yards with his bride after they say their âI dosâ this summer on a Florida golf course.

I wouldnât bet against him.