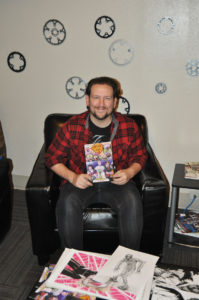 In âUnDead End #1,â by J Wright, the main character, Dean, is a hypochondriac.
âItâs about a hypochondriac, germophobe in a zombie plague outbreak,â Wrights says.
With even the slightest symptom, Dean quickly assumes the worst. As he is delivering pizzas during the late shift, Dean happens upon some old friends, enemies and a military convoy that spills some mysterious cargo. When people start getting sick, they transform into undead cannibals, and Deanâs easy-going lifestyle becomes a battle with his greatest fear.
âAs if washing your hands 40 times a day wasn’t enough, hypochondriac Dean has to deal with a horde of flesh-eating zombies, too,â says Wright.
Twitter/Instagram @TheJWrightStuff
Website: J-wrig.deviantart.com

âI draw stuff,â says Jason Wright. The professional artist and comic book maker has also been described as an all-around swell guy. Wright has a unique artistic talent, and in August of 2014 he released the first of what will be a three-part mini-series titled âUnDead End.â

âI wrote it, drew it, colored it and did all the illustrations,â he says.

The bookâs 32 story pages may only take an hour or less to read, but it took Wright about a year to complete.
âJust to pencil draw a page is a day or two days,â he says. âI did the whole thing, partially as an exercise to get better, but also because I didnât want to pay anyone to do it.â

âUnDead End #1â was self-published by Wright â he works under the name J Wright to avoid confusion with another comic book artist with his same name. The initial printing was about 1,000 copies. He sells them mostly online and at conventions. He says a lot of independent books like his get picked up with the publishing of the second book, and heâs working on it now.

âThe next step for this would be looking at a publisher picking it up and doing a wider distribution,â he says.
Graphic novels are Wrightâs main focus, but âUnDead Endâ has led to a variety of freelance work as well. He doubles as a freelance illustrator and artist, and his graphic art has been a good marketing tool for those other artistry services. He has customers all around the country. Besides drawing comic books, Wright has designed and illustrated custom characters for people, created storyboards for commercials, and he once even drew a cross section of a candy bar for a marketing presentation.

âI have clients Iâve been working with for five or six years,â he says. âThe more work I do, the more work I get.â
Not bad for a shy south-side kid who started life stubbornly set in his ways. Wright first realized he was good at drawing while dazzling classmates with drawings of âGhostbustersâ characters. But as much as he liked drawing, comic books initially annoyed him. Heâd rather have been playing Teenage Ninja Mutant Turtles.

âI honestly didnât like comics when I was little,â he remembers. 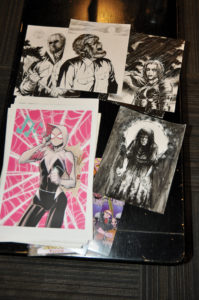 Illustrator J Wright â also known as Jason Wright â is a local comic book artist. He grew up on the south side of Des Moines and went to Lincoln High School. After studying and graduating from The Joe Kubert School of Cartoon and Graphic Art Inc., he returned to his hometown where he now lives with his wife.

That distaste didnât last long, though. After graduating from Lincoln High School, Wright moved to New Jersey where he attended and graduated from a three-year technical school, The Joe Kubert School of Cartoon and Graphic Art Inc. The school specializes in cartoon and graphic art education.

âDrawing, painting, design, layout, script writing, adaptation â stuff like that,â he says. âPretty much anything that could go into making animation or comic books. Itâs like boot camp. You have 10 classes a week. Each day you have two classes, and youâre there all day.â

Going to college to learn how to draw cartoons might sound like a dream, but Wright says the curriculum is demanding and requires long days. He also says the intensity made him better. More importantly, it made him into a professional illustrator, and thatâs a pretty cool thing to be. But not as cool as Teenage Mutant Ninja Turtles. ♦