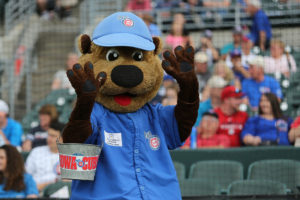 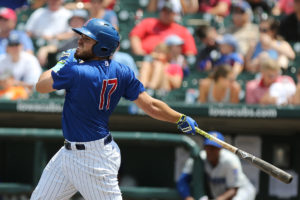 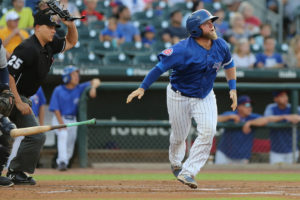 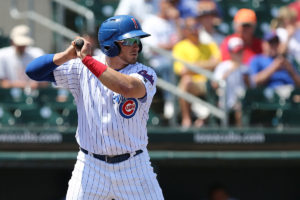 This season marks a milestone in Iowa baseball history. The Iowa Cubs home opener on Thursday, April 5 celebrates 50 seasons of Triple-A baseball in Des Moines. The team started as the Iowa Oaks in 1969, then became an affiliate of the Chicago Cubs in 1981, and one year later was christened as the Iowa Cubs. Central Iowa fans have been rooting for the Cubbies ever since.

The 2018 season also marks a special season for Randy Wehofer, as he is celebrating 20 years in minor league baseball and 11 with the Iowa Cubs. For the last 10 years, Wehofer has been the Iowa Cubs play-by-play announcer. In the off-season, he was promoted to vice president and assistant manager of the organization.
âTo be an even bigger part of this staff is really exciting and a great opportunity that doesnât come around very often,â Wehofer says.

Having spent more than a decade with the team, Wehofer offers insight and knowledge that few possess. One element that surprised Wehofer last season was the Cubsâ high number of roster transactions. Transactions per season are on the rise and have been hovering around the 200s for the last few years in Iowa. Wehofer noticed the spike coincides with Theo Epstein taking over the position of president of baseball operations for the Chicago Cubs. Last season the Iowa Cubs made a total of 212 transactions and used a total of 60 different players. 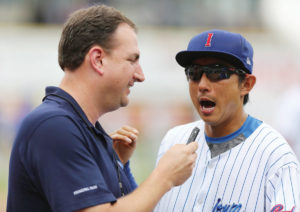 âI thought there would be less opportunity for some of the young guys to go up and contribute, because that roster was so young and established â and the success that they had. They were still pretty creative finding ways to give other guys opportunities,â Wehofer says.

In May of last season, the Iowa Cubs saw top prospect and center fielder Ian Happ called up to the Chicago Cubs. Happ had an exceptional season, finishing the year with 24 home runs. The Chicago Tribune reported that he was only the second switch-hitting rookie in the history of the National League to do so. Iowa Cubs catcher Victor Caratini and outfielder Mark Zagunis also spent time in Chicago.

âThe more your roster changes at Triple-A, the harder it is to have a win streak,â Wehofer says.

In 2017, the Iowa Cubs finished the season with a 67-72 record. Wehofer notes that pitchers were in especially high demand by Chicago, and there was a stretch where twice in a week (if not three times) Iowa Cubs pitchers were put on hold or called up by Chicago, leaving the Iowa team scrambling to fill the position.

âThis year, from a competitive standpoint, if we have the opportunity to have a more stable group of starting pitchers, I think that would translate into more wins,â Wehofer says.

In past seasons, Chicago has focused on drafting position players like Kris Bryant, Javier BÃ¡ez and Albert Amora, Jr. Missing a big-name pitcher, Chicago filled in the blanks with veterans or minor league pickups. Wehofer says that, as a result, in more recent seasons, there has been a focus on drafting pitchers, estimating Chicago has used 70 percent of its picks on trying to find someone to cover the mound.

âWe havenât had a top pitching prospect come through here in a few years because theyâve been so heavy on position players. Now would be the time that some of these pitchers that theyâve developed will start pushing to get to this level for the first time. I think thatâs what the Cubs are looking for, and Iâm interested to see if thatâs what happens,â Wehofer says. âAs weâve seen the last couple years in the playoffs, there is a premium on relief pitching now. Thatâs what front offices and managers are looking to constantly match up.â

Another factor making relief pitchers valuable is the way they are utilized during games, Wehofer says.

Players are now pitching in shorter bursts and playing every game, as opposed to playing most of a game then taking a few days off. This leaves the team needing more bodies.

Speed is also a factor. Wehofer mentions that pitchers in both the minors and majors are now regularly throwing at 95 mph, not something that was seen in the sport just 10 years ago. Hitters are adjusting, too, and are still able to make RBIs off high-speed throws.

âThe game is changing in front of our eyes in a lot of ways,â Wehofer says. 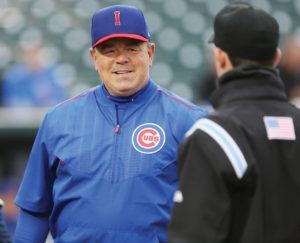 Marty Pevey returns for a fifth season as manager of the Iowa Cubs. Photo by Dylan Heuer

Another familiar face returning for the 2018 season is Marty Pevey. Manager of the Iowa Cubs since 2013, Pevey has been with the Chicago franchise since 2009.

âDes Moines, Iowa, is a hub not only for minor league baseball, but for baseball in general. The people there are huge baseball fans, and they come out and support their local team,â Pevey says of the 50-year anniversary of Triple-A baseball in the city.

In addition to Triple-A experience, Pevey has also coached in the MLB.

âThereâs really not that much difference,â Pevey says of the two leagues, âaside from viewership and money.â

âThe good thing about the major leagues is that you have more information. We were just going over some infields, and the video and information that we got 10-15 years ago in the major leagues was so much more than there was in the minor leagues, but weâre catching up,â Pevey says of the sports technology revolution. âChicago is very informative. They let us know things that are going on in the minor leagues, and I can look at video. I can get and gather reports on guys, whereas 12-15 years ago, I couldnât. It helps me set defenses and get guys ready to play. The differences, from a baseball standpoint, are getting fewer and far between.â

In his time with the Iowa Cubs franchise, Pevey has coached some notable players, such as Kyle Hendricks, Kyle Schwarber, Brian Duensing and Willson Contreras.

âIâve been very fortunate, and so I canât say that one guy sticks out more than the other. But they were all good players when they got here. We did the best we could to help them play and get them prepared for Joe [Joe Maddon, Chicago Cubs manager], so weâre just happy we didnât screw them up,â Pevey says.

No matter how many players come through and go on to be superstars, or are sent down to Iowa on assignment from Chicago â like Kyle Schwarber was last season â Pevey says the vibe in the bullpen is unchanged.

âGuys like that are around every day. Everybody in that locker room is like Kyle Schwarber, Kris Bryant or anybody else. They have the ability to be that guy,â Pevey says of the teamâs talent. âThey are all professional; they all play hard. Theyâre prepared to play, and theyâre all really good athletes.â

While the talent is there, often times the deciding factor on whether a player will make it to the MLB or not is the consistency of his game.

âThese guys, they all have the ability. Itâs about them performing on a daily basis. They stay hot longer in the big leagues. When theyâre cold, they come out of slumps quicker,â Pevey says.

As of press time, a roster for the Iowa Cubs had not been finalized, but Pevey hopes the team can remain healthy for the season and is looking forward to âputting on a great show for the people of Des Moines and playing good hard-nosed baseball.â

FANS OF THE YEAR 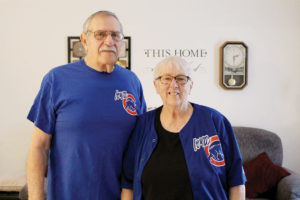 George and Rosemary Ellwanger have been attending Iowa Cubs games for 10 years and have won âFans Of The Yearâ twice. Photos by Cady Colosimo

Iowa Cubs fans George and Rosemary Ellwanger have been attending baseball games at Principal Park for 10 years. Devoted superfans, the couple have received the Iowa Cubs âFans Of The Yearâ award not once, but twice â 2011 and 2017.

âA thing Iâll never forget is sitting out on a cold, cold night, and the snow was coming down, and they were still playing, and I thought, âOh my goodness. As long as they can play, we can sit.â That was a good memory,â Rosemary says.

The Ellwangers began attending games with tickets their children bought them, and they enjoyed themselves so much that they soon became season ticket holders. The first time they received the award, it came by surprise. Their children were notified beforehand, so the whole family and their grandchildren were in attendance for the occasion.

âWe were so surprised. We were just there sitting eating a hotdog, and all of our kids were there and our family and everybody, and this gal came and said, âWould you come with me?â I thought âWhat in the world did we do now,â and I said, âWell, OK.â She said, âYouâve been chosen as fans of the year,â and we just couldnât believe it. It was nice,â Rosemary says.

Their children had also arranged for a skybox to celebrate, and they enjoyed the rest of the game in luxury. The second time they received the award, they were notified before the game, but were just as shocked.

âI was just sitting at home, and the phone rang, and some guy on the phone said, âWeâd like you to be fans of the year,â â Rosemary says.

âThat surprised me more than anything. Itâs so sudden, so near the first one,â George says.

Last season both Ellwangers had surgery, and it caused them to miss a few home games. Once they were ready, they couldnât wait to get back to Principal Park. Still healing, they decided to watch the games from the Cub Club â avoiding stairs and taking full advantage of the Cub Clubâs elevator.

âWe got tickets for that, too. We just make ourselves at home when we get here. It almost is home,â George says.
Steadfast fans for a decade, the Ellwangers have amassed a sizeable collection of Iowa Cubs gear and souvenirs. A few items, like bobbleheads, decorate their home. The rest are in their basement.

âWeâve got lots of the T-shirts; they give those away for free every year. A couple nice jerseys that we got last year, bobbleheads,â Rosemary says.

âA lot of it is thrown into a box,â George says.

âI do love the royal blue,â Rosemary says of the jerseys and team colors.

Rosemaryâs only gripe about the games is the fact that the hot dog gun never seems to get launched in her direction in section J. 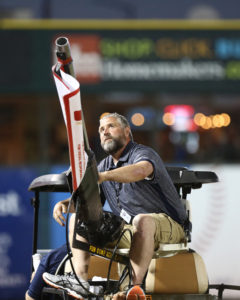 Every home game, fans go crazy at the
chance to catch a hotdog from the hot
dog gun. Photo by Dylan Heuer

The Ellwangers are celebrating their own milestone this season with 60 years of marriage in September. The 60th wedding anniversary gemstone is a diamond, which Rosemary correlates to a baseball diamond. They plan to celebrate with an Iowa Cub themed party, complete with Cub dÃ©cor, popcorn and Nathanâs hot dogs.

âThose [Nathanâs] are the kind they use at the ballpark,â Rosemary says.

Needless to say, the Ellwangers are looking forward to the home opener and another great season at Principal Park.

âWhen youâre sitting â especially on a June night, and itâs beautiful outside and thereâs a cool breeze â youâre sitting there and you think, âIs this heaven? No, itâs Iowa Cubs.â Thatâs what you think. I mean itâs just beautiful.â

âWe have an umbrella for that,â Rosemary says. ♦

(games and times subject to change)