The beat goes on 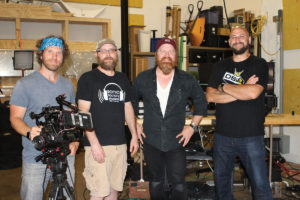 When the pandemic silenced live music at bars and music venues, Iowa musicians and music lovers mourned. Pre-coronavirus â on any given week â the area offered more than 65 live music opportunities.

Fortunately, persistent musicians and venues found a way to offer live local music to satisfy both the musician and live-music junkies through online concerts.

One of those musicians affected was Tony Bohnenkamp. As a full-time musician for 23 years, he currently plays with the Pianopalooza Dueling Pianos. He formerly played with the Nadas and plays with other bands and solo acts.

Bohnenkampâs St. Patrickâs Day gig was canceled about a week before his show. He sat around with his buddies and fellow musicians Brad Seidenfeld, Jon Locker and Jerry Lorenson.

âAll of our gigs got canceled,â he says. âWe were talking and bitching about what was going on in the world. Then we said, why not do something together?â

Jerry and Tony both have audio backgrounds. Jon has the Sonic Factory West studio, and Brad is with JABbermouth Media. Tony suggested they pool their online and audiovisual talents and set up a livestream concert. They could all perform and have guests on the show while still adhering to social distancing rules.

It took them 5 minutes to agree on their name â âDSMTV Liveâ â with a take on the iconic MTV.

For the livestream to be ready by St. Patrickâs Day, they had three days to test equipment. Come March 17, they were live on air at noon, livestreaming for seven hours. Various musical guests rotated in. They set up Venmo payments for viewers to donate. Nearly 300 viewed the actual live show, and more than 50,000 saw the recorded version afterwards.

âThe first one was kind of a shit show,â admits Tony. âBut the next day, we asked, what if we can do this a few days a week?â

They contacted musicians to perform, without pay. In fact, none of the four creators of DSMLive TV were paid, with donations given to band members. The band members were overwhelmed with gratitude.

âSome of them had never been more excited to play a gig. Some were saying â âOh my God, Iâm bringing my guitar. This is amazing,â â he says.

More than 50 musicians and speaker guests have performed. Tony says itâs been successful for several reasons.

âItâs given musicians a safe place to play with four experts in our operation,â he says. âWe work our butts off to produce the highest-quality audiovisual experience.

âSecondly, it exposes everyone to new music. Some bands people have never heard of. Itâs just another revenue stream for these bands.â

Tony is unsure of the future, but for now, DSMTV Live is hosting musician livestreams of the Botanical Blues and the Downtown Farmerâs Market.

âOur plan is to keep rolling with it as long as people are tuning in and want to be a part of our broadcast,â says Tony.

During the shutdown, music venues also felt the crunch of not having their customer base. As a result, the Gas Lamp used their bar as a backdrop to host live-streamed concerts.

Ryan Flattery, co-owner of Gas Lamp, explains, âWe saw businesses with drinks to go. We asked ourselves, how can we take our product out?â

They brought in a camera and sound crew, along with a band, and recorded concerts. Live shows were interactive as fans sent in song requests, while the band shouted out their names online.

âWe had a lot of views and responses,â says Flattery. âPeople sent in over-the-top donations and felt it was a good way to keep the band members going. For some of the band members, thatâs their sole income.â

The online donations were split among the band, sound and production members.

They hope to get back to live music events with a full audience.