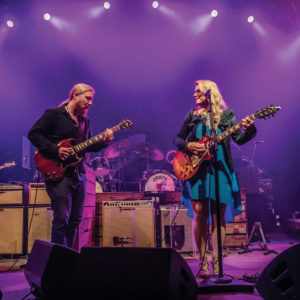 Everyone enjoys a twofer, when you can get two for the price of one. Whatâs special about this musical twofer is the incredible talent of the Tedeschi Trucks Band, which brings its tour to Stephens Auditorium in Ames on Jan. 22.

The husband-wife musicians, Derek Trucks and Susan Tedeschi, formed the band 10 years ago after successful solo ventures. Tedeschi, a blues, rock and roll artist, began singing and playing the guitar at age 13. Her husband, Derek, also a child prodigy, played guitar with the Allman Brothers Band, toured with Eric Clapton and appeared twice on Rolling Stoneâs 100 Greatest Guitarists of All Time list. Each has Grammy nominations and music awards, both as a solo and as a group.

CITYVIEW recently caught up with Trucks, who admits it has been a bittersweet year.

The bandâs fourth studio album, âSignsâ hit No. 1 on Billboardâs Top Blues Album in 2019. On the same day the album was released, fellow bandmate Kofi Burbridge passed away. Trucks had played with Kofi for 20 years.

âIt was a great album, which ended up taking on a lot of significance after his death. Itâs emotional to listen to the album, to hear him play. The album will occupy a certain place in our hearts for the rest of our lives,â he says.

The husband-wife duo, along with 10 other band members, honed their sound on the road.

âItâs been an incredible run. We tour hard. Weâre more than a touring band; weâre a lifelong band and a family who have grown up together. Our ups and downs have brought us tighter and closer,â says Trucks.

Trucks started playing guitar professionally at age 11. Heâs the nephew of Butch Trucks, drummer for the Allman brothers, whom he played with for more than six years. He toured with Eric Clapton for one year.

âI was named after Derek & the Dominos (Claptonâs band). It was an incredible life-changing tour,â he says. âIâve made some connections I donât take for granted.â

Trucks plays the slide guitar, which can emulate the sound of a human voice. With no breaks in the notes, the tone and melody can draw out more emotion.

âItâs blues from the beginning. Itâs the sound of a diddley bow or a wire from a broom handle. I use an old Coricidin bottle,â he says. âElectric slide is not mimed; itâs untouched ground, unchartered territory when I play it.â

âI appreciate that my first decade of playing music, there werenât people posting and taking pics every time. If you write a new song, itâs on YouTube the next day,â he says. âMusic doesnât have time to grow like it used to.â

Regardless of audience size, itâs an honest connection with the fans and not a greatest hits show.

âYou never phone it in. Itâs church for us. You make a commitment, no matter what happens. Youâre not bullshitting or pandering the audience. Itâs a sacred experience,â he explains.

When the band arrives in Ames, its goal is to create something new.

âOur live concerts we can stretch out more and stay inspired,â he says. âWeâre a crazy band of 12, lucky to be playing together and making real connections.â ♦