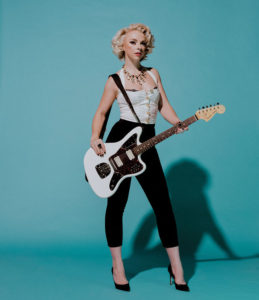 When discovering a musician with raw talent, you tell your friends, âBuy her record! Attend her concert!â But if people do, then the venue will be packed, leaving you little room to enjoy your favorite up-and-coming blues guitarist. Thatâs the case with singer and guitarist Samantha Fish, who performs at Woolyâs on Dec. 1.

CITYVIEW spoke to Fish from her home in New Orleans about her music.

At first glance, Fishâs appearance might resemble a bubblegum pop star, reminiscent of a young Madonna or Marilyn Monroe. Yet once she secures the guitar strap around her neck and starts strumming and singing, a soulful rock, blues emerges. Sheâs carved her own look and sound, which has paid off.

The 30-year-old hails from Kansas City. While her musical family listened to classic rock riffs from the Rolling Stones and AC/DC, she picked up a guitar, playing mostly rock ânâ roll, and wanted to know more about her idolsâ influences.

âAfter studying Jimmy Page and Keith Richards, I wanted to know more about their influences. One thing they were all into was the blues,â she says.

With her hometown known for jazz and blues music, she began playing more blues, and, in 2012, she won blues debut artist at age 23. This summer she played with blues legend Buddy Guy.

âWhen I played with Buddy Guy â my reaction was, âHoly shit, thatâs cool,â â she says. âI played with a few other guitar greats including Stephen Tyler and Alice Cooper.â

âThereâs a long list of women guitar players, but the representation of women is hard to find. Theyâre out there, but not all playing the blues,â she says.

Folks unfamiliar with Fish attend her concerts but arenât sure what to expect, seeing a young woman with a guitar.

âThereâs often a mix of confusion and curiosity when they first see me. Some come in with a bias about a woman playing a guitar,â she says. âWomen have extra hurdles, and Iâve had to prove myself extra hard over and over.â

However, once she begins playing, the crowd recognizes sheâs a legit singer and guitar player.

âOnce they realize Iâm not a schtick or gimmick, I feel Iâve earned my place,â she says. âThey come to the show, and itâs the music that keeps them there. The gender roles fall to the wayside, and people know weâre all there for the music.â

Fish just released her sixth studio album, âKill or Be Kind,â and feels itâs her most mature album so far.

âIâve taken more chances and become more confident in my writing and music. Taking risks has paid off. The new album is more of a grown-up thing, and the music is all over the place,â she says. âIâve stretched the boundaries of blues as much as I can.â

Samantha Fish performs at Woolyâs, with opener Nicholas David, on Dec. 1. Tickets are available at the box office, $18-$20, or Eventbrite. ♦