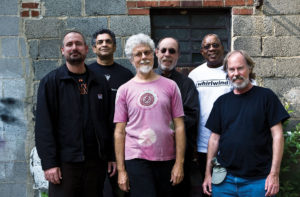 Little Feat is returning to Iowa during its 50th anniversary tour. Photo courtesy of Little Feat

Bill Payne of Little Feat is excited to perform at Hoyt Sherman Place on Oct. 8 and for his return to Iowa for the groupâs 50th anniversary tour.

Little Feat formed 50 years ago, with Payne as an original co-founding member. Whatâs their secret to being together for so long?

âFear is our top motivator,â Payne laughs. âWeâre afraid to do anything else.â

On a serious note, he says that music and fans are part of their longevity. Little Feat did a grassroots campaign, where they got to know their fans.

âWe realized that everyone has a life,â he says. âItâs interesting to learn lifeâs twists and turns and good to know who listens to our music.â

Little Feat has recorded 16 albums and been nominated for one Grammy. And, yes, the bandâs name is derived from a band memberâs foot size. Their more popular tunes, âWillin,â âDixie Chickenâ and âSkin it Backâ are earthy, Dixie-funk, rockabilly â part of Little Featâs hybrid signature sound. Theyâve collaborated with Willie Nelson, Bob Dylan and Robert Plant on albums. Payne currently plays keyboard with the Doobie Brothers and embarks on their 50th anniversary tour next year.

Payne feels that the longevity for the two bands â 50 years â is an accomplishment.

âNobody had a clue back then that weâd still be together,â he says.

Little Feat plays limited concerts, and its strength is that its fans appreciate live music.

âWeâre a musicianâs musician band,â he says. âPeople who absolutely love live music come to hear us. Our music has held out this long. Will it last? I donât know, but Beethoven has done well.â

One of the bandâs more memorable shows was in Amsterdam in 1975. The Rolling Stones attended their concert, viewing them from back stage.

âI was gushing over Keith Richards, when he came up to me and said, âHey, mate, weâre all part of the same cloth.â It was a big deal,â recalls Payne. âHe wanted to let us know weâre all musicians together.â

Payne practices keyboards daily. He recounts the wisdom from his piano teacher when he took lessons as a kid in Ventura, California.

âShe told me, âYou have a desk, knees, wall. You have a way to practice even if you donât have a piano.â In fact Iâm doing it right now,â he says. âI know where âCâ is and âFâ sharp. Itâs a good trick thatâs served me well.â

Payne says their music hasnât changed over the years. He interviewed with TV journalist Bill Flanagan 10 years ago, who commented about how their music lasted four generations, which was rare.

âNow itâs five generations; itâs nice to be part of that landscape,â he says.

Payne, as a âyoung 70-year-oldâ hopes to play as long as he can.

âI look back 50 years at all the trials, tribulations, successes and near-successes that are all part of a longer journey,â he says. âIâm still playing at the top of my game. The ride is still taking place. I credit the fans, good music and the opportunity to share part of something bigger than any of us.â ♦