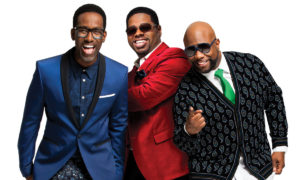 Boyz II Men currently holds the distinction of being the best-selling R&B group of all time, with an astounding 64 million albums sold. The trio of Nathan Morris, Wanya Morris and Shawn Stockman will perform in concert at the Des Moines Civic Center on Oct. 1. CITYVIEW recently asked the following questions to the bandâs co-founder Shawn Stockman. His answers are below.

Tell me about your upcoming tour.

âWe are so excited about our upcoming tour and connecting with our fans across the country. Each city is different, and we love meeting the people and feeling their energy while weâre on stage.â

Why has Boyz II Men endured all these years?

âWeâve known each other since we were in school and began travelling across the globe together for 25-plus years, so we are like brothers. Like a family, we stick together through the good and bad times. What keeps us together is our philosophy as musicians, as artists. Weâre committed to making timeless music, willing to work hard and, ultimately, we do it all for the fans. Thatâs how weâve always approached our careers, and our fans have responded well to it and respected it.â

Do any of your awards stand out?

âEvery award means so much because it shows how much our fans believe in us and enjoy the music we share. Most recently, we were nominated for the Country Music Awards Performance of the Year, and while we didnât win, it was an honor to even make the list. We had the opportunity to perform alongside Brett Young, who is iconic in the country world.â

Whatâs changed about your music from 25 years ago?

âAs weâve evolved as a group, weâve taken more risks. Weâve blended genres and experimented. A few years ago, Nate and I learned how to play guitar and incorporated it into our shows in Las Vegas.â

Who attends your concerts?

âOur audience is very loyal, and we love them for that. Our fans have grown up with us, so the ladies (and gentlemen) who came to our shows as teenagers are now bringing their kids to shows. Itâs great to have so many generations in our audience and makes for a really fun show.â

Tell me about your charity work and Boyz II Men House

âGrowing up and throughout our careers, we had to work hard, so weâve never taken our success for granted. Itâs made us realize so many people look up to us for inspiration, so we make it one of our goals to give back, which is why we created the Boyz II Men House. Also, as a father who has a son with autism, my wife and I created a charity, Micahâs Voice, to help and support families affected by autism. The Vegas shooting was a tragic event, and having our residency at The Mirage, Vegas is our second home. We wanted to help the victims, families and the city and donated proceeds from our first show to show our support for the city and people who have become our close friends and family over the last three years.â

Name something unique about the group

âWe always try to find a hotel that plays Cartoon Network and Nickelodeon for Wanya, who only watches those two channels unless football is on. Nate is a huge Star Wars fan and built an entire Star Wars room in his house.â ♦