Headliner, Grammy winner to perform at 80/35. 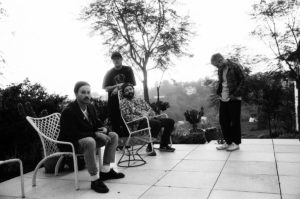 The 80/35 music festival is scheduled for July 12-13 at Gateway Park. This yearâs extravaganza features more than three dozen acts playing on five different stages. Portugal. The Man is one of 80/35âs headlining acts, and the band is scheduled to perform on Hy-Vee Stage on July 13. CITYVIEW spoke with the bandâs drummer, Jason Wade Sechrist, about the upcoming gig.

The band formed in Wasilla, Alaska, in 2006, but the areaâs live music scene wasnât viable. Two of the original members packed up and joined Sechrist in Portland, and that is how Portugal. The Man was formed.

The bandâs name â Portugal. The Man â with a period in the middle, regularly gives editors headaches and leaves readers squinting, but it is the proper rendering. The band isnât named after Portugal and doesnât have any connection to the European nation. Likewise, it isnât named for a man named Portugal. It is just a random name.

With eight recorded albums, the band plays a combination of progressive, psychedelic, punk and alternative rock. The bandâs resume includes a Grammy Award for Best Pop Group Performance in 2018 for their hit song, âFeel It Still.â
Sechrist says, in the middle of a European tour, they âsnagged a Grammy,â which reflects 15 years of hard work in the making.

âIt was definitely a blast,â he says. âIt catapulted the band into a new situation. Weâve been offered more events, and itâs opened up new options.â

The band doesnât fit into a genre, which is frustrating for folks who want a label.

âWhen youâre inside the band, recording albums, youâre genre-less,â he explains. âWhat people see as a genre and hear on the radio gets pinholed into a certain genre. What happens on the radio versus the recording studio are two different things.â

Playing live concerts allows the band to perform diverse musical selections.
âWe can get heavier, make it a little Pink Floyd-ish or Grateful Dead-like to stretch out our tunes,â he says.

Touring is a big aspect of the band, consisting of a hectic, intense schedule. Sechrist lives in Portland, records albums in Los Angeles and tours worldwide.

âItâs pretty darn fun, and we donât hit it too hard,â he says. âItâs almost like PTSD when weâre done. Itâs such a letdown.â

On the other hand, the band is trying to figure out how to perform and still do justice to family and friends. While Sechristâs wife was in labor, he boarded an airplane to meet her.
âI missed my first kid being born,â he says. âTouring takes a lot of time. Births, deaths â things happen while youâre gone, and you canât always pay honor to your loved ones.â

Sechrist says he and his fellow band members are avid basketball fans, and they attempt to mimic successful basketball team basics.

âBeing up on stage, weâre all comfortable and confident,â he says. âWe see basketball as a team sport. We ask ourselves, âAre we performing well? Nailing all the shots?â Our offstage camaraderie helps as well.â

Sechrist says 80/35 is fun event to play, and he is looking forward to it.

âIâm a huge fan of outdoor shows,â he says. âItâs the nighttime in the fresh air. Thereâs no ceiling. You know the building wonât collapse or catch on fire. â¦ I have a feeling music started without a shelter. Hopefully weather will be perfect. I know Iowa likes to rock.â

Tickets for 80/35 are available at Midwestix.com. ♦