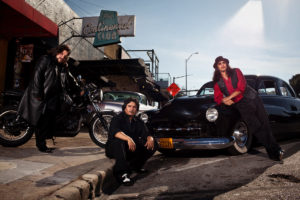 When the Los Lonely Boys play at Woolyâs on March 12, their goal isnât to have a sold-out show. They simply wish to express themselves through their music.

âOur goal is to do our best today, at the moment,â says Jojo Garza, vocalist and bass guitarist. âThereâs no guarantee about tomorrow. We recognize all moments are precious.â

Jojo spoke from his Texas home about he and his brothersâ return to Iowa for a concert. The singing trio includes his siblings, Henry, guitar, and Ringo, drummer. As kids, they performed with their dad, Enrique, âRingo Sr.,â and his band. After breaking away from their dadâs band 14 years ago, theyâve recorded a dozen albums. Their hit No. 1 single, âHeavenâ sold two million copies and earned them a Grammy for best pop performance by a duo or group.

Los Lonely Boys plays a bluesy âTexicanâ rock. Jojo stresses they donât fit into a certain genre, their music has evolved through the years.

âOur music is like the seasons,â he says. âWeâre always changing â like when the leaves fall or the grass turns green. Itâs like that with any song. We definitely have an evolution in our sound over the years. Weâre always the student and never the teacher. Weâre a flowing river. Stagnation is not in our repertoire.â

The group sings some songs in Spanish, but Jojo says it is about the music.

âWe can be chameleon-like, but weâve removed ourselves from being locked into a genre from the get go,â he says.

Jojo adds that their brotherly bond outweighs any sibling rivalry.

âWeâve been together all our lives,â he says. âOur mom and dad raised us to love and respect each other. Weâre all on the same path musically.â

When the group won their Grammy, Jojo says they were pleased.

âI donât want to say proud, but definitely pleased,â he says. âWe were raised to play music just for the love of music, but weâve turned it into a business. Itâs our way of flipping burgers or laying tile. Itâs a business.â

The Grammy marked a high point in their career. Especially sweet was feeling the recognition of their peers.

âItâs fantastic to be recognized, but our purpose is to show our ability thatâs been given above,â he says.

The group is constantly writing songs and hopes to record an album soon.

âAlbums arenât like they used to be,â he explains. âIt used to be vinyl, cassettes, CDs. Now everything changes and moves as fast as the download rate.â

Although the band has a social media presence, they prefer face-to-face contact.

âMost of our interactions are live through our music,â says Jojo. âPersonal meetings and talking with people are considered special moments and itâs our way to share ourselves.â

Jojo says they will continue to work hard, which is just like everyone else in their line of work. They are excited to perform in Des Moines.

âWeâll be throwing in songs from back in the day, and weâll throw in a few new ones,â says Jojo. âWeâll be coming together for all of the people, and hopefully everyone will have a good time.â ♦