Deadheads unite with the Schwag 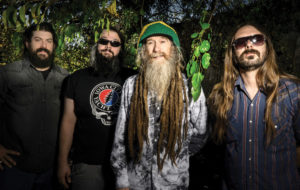 Break out your tie-dye shirts and let your hair down. Deadheads can free-flow dance to a three-hour concert by the Schwag, a Grateful Dead/Jerry Garcia Band cover band, at Woolyâs on Dec. 7.

Jimmy Tebeau, founder of the Schwag, vocalist and bass guitarist, talked with CITYVIEW about the upcoming concert.

With his current band, Tebeau has played more than 3,000 concerts, including a âSchwagstockâ festival. Formed in 1991, the St. Louis-based band tours the Midwest, playing nearly 150 shows a year. With a massive 200-plus song set list from both Grateful Dead and the Jerry Garcia Band, each show is unique.

Fans from all ages arrive in traditional Deadhead rainbow-colored T-shirts, long braided hair and flowing hippie dresses. Tebeau says that it surprises him to see so many young people singing along to the songs, and the band dresses like their fans also.

âWe already look like hippies with just about whatever we wear, due to our beards and long hair,â he says. âThereâs a stage dress code for the band members; shoes are optional.â

One memorable show the Schwag performed was in 2013 for a St. Patrickâs Day celebration in Rolla, Missouri. They played at the outdoor band shell near the railroad tracks, and, as they played the song âCasey Jones,â a large train came rolling behind the stage, blowing its horn.

âJust as we were singing the chorus of the song, âdriving that train, high on cocaine, Casey Jones you better watch your speed,â the train rolled by and the crowd went nuts,â he says. âIt was perfect timing and divine intervention. People thought we timed the train schedule, but it was all luck, leading to one of those marvelous rock concert experiences.â

The Schwag performs song âsandwiches,â where one song blends into another one, with numerous chord changes. When asked what Jerry Garcia might think of the Schwagâs performance, Tebeau replies, âI hope he feels weâre sticking true to his songs. We have fun with the chord changes. I think Jerry would feel the same way.

âItâs one thing to be able to recreate an original song, but the next step is to take it to another level of musicality,â he says. âWe want to breathe life into every show we do.â

The Schwag has performed at Woolyâs several times and plans on performing songs they havenât played in several years.

âItâs always a great crowd in Iowa,â he says. âWeâd like everyone to mentally and physically prepare themselves for a dance party in front of the stage. There are going to be some deep grooves going down all night long.â