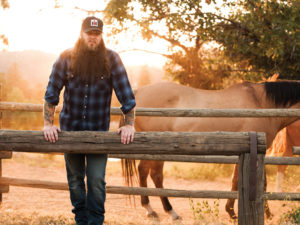 When Whitey Morgan was a child, his grandpa played guitar, strumming the tunes of Johnny Paycheck, Hank Williams, Johnny Cash and other country classics. He demonstrated several country chords while Whitey soaked in the melodies, practicing on his own.

When Whitey became a teenager, he began listening to classic rock musicians such as Tom Petty and Bob Seger. He started his own band, and instead of picking up a guitar, he opted to play the drums.

Now fast forward to Whiteyâs young adulthood. He had previously enjoyed playing the drums. But when his grandfather died, Whitey inherited Grandpaâs guitar, and once he held the beloved instrument in his hands, his drumming career was over. Soon, melding both country and rock music, he formed his own band, Whitey Morgan and the 78âs. The group brings its tour to Des Moines on Nov. 9, performing at Woolyâs.

Whitey spoke to CITYVIEW about his new album and upcoming concert. He released a new album, âHard Times and White Linesâ on Oct. 26 (see review on Sound check). With 10 country-honk-tonk tunes, he says this album didnât change much from his previous four albums.

âI donât tend to stray from the past,â he says. âItâs more of the same type of music â the same direction. That might sound boring, but it works for me.â

He says his album is still heavily influenced by Waylon Jennings, but with a combination of his classic rock background.

âItâs not all â70s outlaw music. Iâve let my rock influence of Petty and Seger into the picture,â he says. âIâm narrowing it down to a sound of my own.â

His grandpa is still a significant influence in his musical endeavors. Whitey finally fulfilled one of his grandpaâs wishes â to play in the Grand Ole Opry.

Whitey recently played the Ryman Auditorium, which formerly served as the Grand Ole Opry from 1943-1974.
âAll of my grandpaâs heroes played at the Ryman,â he says. âItâs always been my dream to play there since I was a kid. It was a memorable night. I had lots of family and friends come â knowing it was a special night for me.â

Whitey and his 78âs band members have toured together for six years. He appreciates the loyalty of his mates and the experiences they have shared while touring together.

âThereâs no replacement of the things you pick up on while touring on the road,â he says. âThere are so many life lessons â which is an irreplaceable part of touring.â

However, touring has changed from his early years.

âWe were broke, but there was less pressure,â he says. âWe might have only had 10 people show up. Now there are a thousand people to please.â

The toughest part of touring is leaving his family â and his 2-and-a-half-year-old son. He says his life situations have âflip flopped.â

Heâll make the trek to Des Moines for a repeat show at Woolyâs, where fans can expect the recognizable thunderous show as in previous concerts.

âItâs a loud, energetic honky-tonk concert,â he says. âI donât say country, because itâs not country. Itâll be like walking into a familiar honky-tonk bar.â