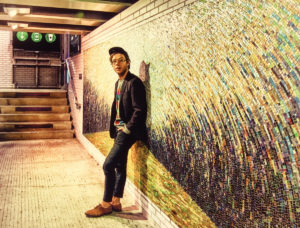 In 2015, Ryan Adams tweeted and Instagrammed his praise of Fordâs upcoming album âIâm Giving Up On Rock & Roll,â and Ford wrote a Reddit post detailing the effects of the âThe Ryan Adams Bump.â The post was quickly upvoted, reaching the No. 2 poston Redditâs homepage, and Ford subsequently received another spike in views due to the âReddit Hammer.â

Ford is now signed with New York City headquartered management company United Entertainment Group (UEG also represents Nickelback), and is working out a record deal. Last fall UEG brought him to New York, where he played every Wednesday in September for a month-long residency at the HiFi in the East Village. The crowds, Ford noted, got bigger every week, which he says âfelt really meaningful and validating.â The small club-like venue closed in October but was a long-noted rock venue where bands like The Strokes, Yeah Yeahs Yeahs and Interpol had played.

âThat was awesome, and it was cool to live in New York City for a month,â he says.

Between his Wednesday NYC shows, Ford traveled the east coast and played in more big cities, like Washington, D.C., and Boston. He also recorded new music and worked with producer Tad Kubler of TheHold Steady. Ford has been a fan of Kublerâs band since he was in college and says he was both honored and humbled by the experience.

âIt requires a different level of patience than when you do everything on your own, but itâs OK,â he says with a laugh. âItâs been a long, interesting process to work with new people outside of the Iowa scene, but itâs been enlightening.â

Ford spent the rest of the fall of 2017 touring in Italy and also played a show in Switzerland. One of the high points of the tour was when he played in an old theater in Florence.

For most who have seen Ford perform live, his performances have a certain reckless physicality. Even though he plays the piano, he fervently moves about the stage, goes into the crowd, or stands atop his piano. The physical-ness of his shows are amped up even more when he performs as the duo Gloom Balloon with Patrick Tape-Fleming. Ford will be in Iowa for most of April and will be performing at the Vaudeville Mews on April 28. He will play two sets; solo as Christopher the Conquered and also with Gloom Balloon.

âOur (Gloom Balloon) personality trait is to work really hard to make the sure the audience is engaged and having fun, and having an experience,â he says.

In this new stage of his music career and working as afull-time musician, Ford jokingly (yet in all seriousness) says his goals are to be able to pay the rent. However, he does have even bigger aspirations.

Iowa Music 4×10
Christopher the Conquered is embarking on a unique tour, where for 10 days in April he will travel to cities across Iowa and record 10 original songs in 10 different studios with 10 Iowa artists. The public is invited to attend, with limited space available. The tour will be filmed by the DEFT video crew for a documentary about the experience and
will be screened at the Vaudeville Mews in Des Moines on June 2. The project is supported by a grant from the Iowa Arts Council.
April 14 Ames – Alexander Recording Kompany with AIBU
April 15 Auburn – King of the Tramps Studio with King of the Tramps
April 16 Otho – Juniorâs Motel with Tina Haase & Brandon Findlay
April 17 Dubuque – Dyed In the Wool with Medicinal Purposes
April 18 Waterloo – Jealous Dog with TWINS
April 19 Solon – Magic Barn Studio with David Zollo
April 20 Davenport – Future Appletree Too with The Candymakers
April 21 Iowa City – Flat Black Studios with Brian Johannesen
April 22 Des Moines – The Establishment Recording with Annalibera
April 24 Des Moines – Midday Studios with Gloom Balloon