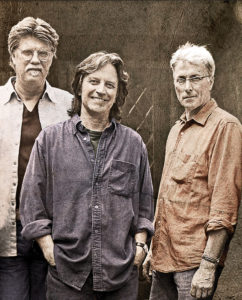 Formed in 1966, The Nitty Gritty Dirt Band has been a part of the American lexicon for more than 50 years and is still trucking.

âIâm going to pack my bags in a couple weeks, and weâre going to play some shows, which we love to do,â Nitty Gritty Dirt Band keyboardist Bob Carpenter says. Carpenter has tickled the ivories with the band since the late 1970s, and has been with them full-time since 1980.

âYou always go back to the recording sessions, and you go back to the live shows,â Carpenter says of his favorite memories with the band. âWe did a couple Farm Aid Shows. The first one was in Champaign, Illinois, I think there were like 75,000 people there, and there was about 20, 30 acts, everybody from Roy Orbison to Willie Nelson. Those are the things that really stick in your mind. Those shows when youâre around a lot of your favorite artists and you can hear them play, the energy level is really high. Those would be the things. Then, of course, winning the Grammys. All that stuff is very good in my mind, exactly how that happened, where I was at the time.â

Where does he keep the Grammys?

âThese do not go into a box. They are sitting on my piano actually,â he says.

Pre-Farm Aid and pre-Grammy, The Nitty Gritty Dirt Band officially changed their name to The Dirt Band â which lasted from 1976-1981. It was how most people already referred to the band, but the change still caused confusion, even within the music industry.

âWhat happened was Billboard Magazine, I guess in 1980, 1981, somewhere along there, we got a nod for Best New Group. We realized that probably people werenât getting the joke so we put the Nitty Gritty back into the name,â he says. âIt was like Prince changing his name back and forth. It seemed like a good idea at the time, but nothing really changed with us or the music or anything, we just shortened the name up.â

One of the bandâs most well-known hits is âMr. Bojangles,â originally written and recorded by Jerry Jeff Walker in 1968. It became the bandâs first hit single when they released their version in 1970. However, the question remains, who is Mr. Bojangles?

âThere was an actor who called himself Bojangles, but this was a song that Jerry Jeff Walker wrote, and whether or not he actually met that guy in a jail cell in New Orleans is up for discussion, I guess. We never really got a definitive answer,â he says. âI have a feeling, just my personal opinion, that Jerry Jeff just wrote a song based on somebody that he met or knew or story that he heard. I really donât know.â

While âMr. Bojanglesâ put the band on the map, 1987âs âFishinâ in the Darkâ cemented their place in pop culture. Having currently racked up more than more 23 million streams on Spotify, it is by far the bandâs most streamed song.

âItâs a great thing to have a career hit like that, and weâve been fortunate in the fact that weâve had a couple of them,â he says.

A hit of such magnitude has inspired musicians both big and small to release their own covers of it â and it can often be heard by cover bands in rowdy bars and at bonfires when a good olâ boy breaks out an acoustic guitar.
âThat happens to good songs, and everybodyâs covered it. Garth Brooks is playing it at his show, I think now heâs covered it â heâs put it on records. Luke Bryan is doing it. Thereâs a lot of people out there doing it. Every band in the world thatâs playing in small local venues is doing it,â he says.

See Carpenter with The Nitty Gritty Dirt Band live when they play at Hoyt Sherman Place on March 15. ♦