The hard-rock group released its sixth studio album in May. âAttention Attentionâ soared to No. 5 on the Billboard 200 chart, and it has received noticeably more critical acclaim than the groupâs last few releases. 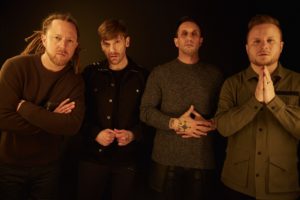 âI think a lot of it has to do with [our bassist] Eric being the producer of the record,â Kerch says. âHe knows our strengths and weaknesses and knows how to pull things out of us because he knows who we are and what kind of players we are.â

On its current tour, Shinedown shares top billing with Godsmack. The double-feature format means shorter sets, usually about 75 minutes, but the band is intent on packing each show with the tunes people want to hear.

âThis is the first time on the setlist that weâve worked in some new songs,â Kerch says. âWe try to get in as much as we can. Fan favorites, as well as the new stuff thatâs fun for ourselves.â

The group has already played many songs from its new album while on tour, including âDevil,â âPyroâ and âBlack Soul.â Upcoming shows will showcase the bandâs latest single, which has experienced popularity amongst its fans that is organically grown.

â[âGet Upâ] has had such a viral reaction,â says Kerch. âItâs a feel-good song. Itâs a summer song. Itâs the right time of year to release a song like that, coming off of âDevilâ which had some heavy subject matter. âGet Upâ has a bit more of a positive vibe, [and] people wanna have a good time during the summer.â

âAttention Attentionâ was penned as a concept album combining experiences from each of the four band members during the previous four years, portraying them through the lens of one central character. Because the music delves into heavy subject matter, including themes pertaining to addiction and depression, Kerch says the band didnât want to cut corners when it came to the albumâs production.

âWhat you hear on the record are real drums,â he says. â 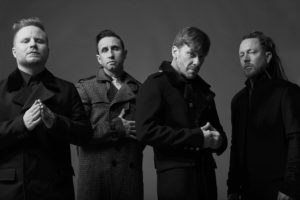 Those are the drums that were recorded. Each song has a different snare drum or kit â¦ And even when you listen to some of the loops, those are samples that we created in the studio. It gives it a fresh feel.â

Keeping its new material fresh is critical, but Shinedown has been putting out albums for more than 15 years, and Kerch says the groupâs experience is also an asset.

âWeâre older,â he says. âWeâre wiser. Weâve worked harder on our craft. Weâve become better songwriters and players as a whole. We donât wanna make the same record twice. There are plenty of fans out there that would love if we made âLeave a Whisperâ a million times over, but thatâs the 24-year-old me not the 42-year-old me.â

Shinedown co-headlines Wells Fargo Arena along with Godsmack on Sunday, July 29. Visit iowaeventscenter.com/events for ticket information and other details.